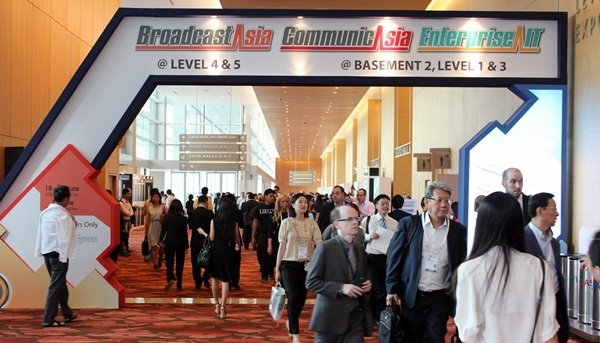 CommunicAsia2013, EnterpriseIT2013 and BroadcastAsia2013, the most relevant and largest industry event of its kind in Asia, closed after a week of fulfilling business interactions and knowledge exchange amongst like-minded industry professionals. The four-day event, held from 18 to 21 June at the Marina Bay Sands, saw more than 51,000 attendees from 100 countries throng the exhibition halls and conference suites.

“The shows have done extremely well this year. Attendees, including exhibitors, conference speakers and delegates, as well as members of the press, have expressed fulfilment with what they were able to achieve this year. For us, this is testament to the success of the shows,” says Stephen Tan, Chief Executive of Singapore Exhibition Services, the organiser of CommunicAsia2013, EnterpriseIT2013 and BroadcastAsia2013. “By holding all the shows under one roof, we could leverage the increasing convergence of technologies across both sectors, and still have each show maintain its own appeal.”

Highlights from CommunicAsia2013 and EnterpriseIT2013

Global industry leaders showcased the latest technologies and solutions for the information and communications technology (ICT) and digital media industries. Visitors were treated to first views of the Panasonic Toughpad JT-B1, a 7-inch Android rugged tablet designed for Asian customers. Huawei, one of the show’s largest exhibitors, unveiled its P6 Ascend, the world’s slimmest smartphone just a few hours after its global launch in London. Thuraya unveiled an innovative phone sleeve, which converts an ordinary iPhone into a satellite phone for mobile communications almost anywhere in the world, by connecting the phone to Thuraya's satellites.

CommunicAsia2013 also brought together its largest ever contingent of more than 130 satellite communications companies. For the first time ever at a tradeshow, live ultra-high-definition content was streamed to an Ultra HD TV screen over MEASAT’s satellite network, using Ericsson’s compression technology.

For trade visitor Irene Mayarani, Business & Risk Analysis Manager, PT. Ketrosden Triasmitra of Indonesia, the trade shows offered networking opportunities to enhance business, as well as source for technological solutions that meet their requirements. “There is a good representation of international exhibitors at CommunicAsia2013 and I’m impressed with the show. In particular, the solutions provided by the exhibitors from China attracted my attention because of their competitive pricing. I am here to find suppliers for fibre optic deployment and I have found useful contacts for future partnerships. This is my second time at the show and I will be back again for the next show!” affirms Ms. Mayarani.

Ultra HD (or 4K) was the buzz word at BroadcastAsis2013, where various aspects of the entire 4K ecosystem, from cameras to production, and from post-production to content delivery technology were underlined.

BroadcastAsia2013’s first-time exhibitor Ericsson partnered with CommunicAsia2013’s MEASAT to provide the encoders and receivers to facilitate the delivery of Ultra HD content from MEASAT’s satellite feed. This is a perfect example of how the technologies at CommunicAsia and BroadcastAsia complement each other and validates the convergence of technologies across the ICT and broadcasting sectors.

“BroadcastAsia2013 has been a successful experience for us. We had an extensive showcase of our technology solutions from acquisition to delivery of content on multiple devices. We are pleased with the quality of visitors to our booth as we can see that these are valuable business stakeholders and we were happy to be able to connect with them at the show,” says Ward Hansford, Head of TV, Asia Pacific, Ericsson, Hong Kong.

Blackmagic Design unveiled its Blackmagic Production Camera 4K as well as their latest 6G-SDI products that allow Ultra HD products to be integrated into current SDI based television systems. Attendees were enthralled by Panasonic’s Ultra Wide Angle camera that showcased an entire football field at once. GoPro showcased its latest camera HERO3 that is 30 per cent smaller and 25 per cent lighter, and twice more powerful than its predecessor and includes 4K video recording capability.

Following the visionary address, a compelling joint panel discussion brought together C-Level executives from both ICT and broadcast industries. Panellists identified the immediate steps required to develop win-win strategies for both sectors as the broadcasting industry goes through a transformation in an increasingly converged world.

Delegates found the CommunicAsia2013 Summit sessions informative, as they offered good coverage on industry’s most talked about topics such as CDN, BYOD, m-commerce, mobile broadband and LTE. They were also able to broaden their horizons after hearing experts share their views on upcoming trends and best practices.

Running concurrently, BroadcastAsia2013 International Conference captured the attention of delegates, who enjoyed insights on OTT technology and its widespread adoption in the broadcast industry. Leslie Johnson, Head of Public Relations, Conax, Norway, says “I was impressed with the level of engagement between the speakers and audiences at the BroadcastAsia2013 International Conference. It was a highly valuable experience.”

Industry professionals are reeling with much food for thought at the fourth edition of the Creative Content Production Conference. Interactive sessions and workshops by high-profile industry veterans provided insights on how to produce good content to appeal to a global market.

“I have attended every installment of the Creative Content Production Conference since its inception. This year’s edition has provided tremendous knowledge and insight into the development and growth of the industry,’ says Mohd Mustafa Fazil Mohd Abdan, Executive Director, Communications and Multimedia Content Forum of Malaysia.

CommunicAsia, EnterpriseIT and BroadcastAsia will return to the Marina Bay Sands from 17 – 20 June 2014.