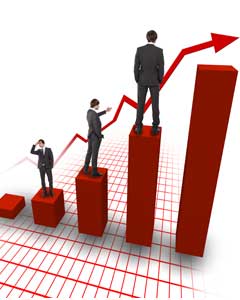 China holds the key to growth opportunities for businesses around the world in the next two to three years, according to global research released by Allen & Overy recently.

When asked to identify the three markets that presented the best opportunities for growth for their business, global executives ranked China the clear number one with 44% of respondents naming it, well ahead of India (34%), the United States (23%), Brazil (14%) and the UK (12%).

China received its strongest "vote of confidence" from respondents in South Korea, with three quarters (75%) of respondents targeting China as a key growth market, followed by Germany (69%) and Brazil (60%).

Allen & Overy conducted in-depth research among 1,000 business leaders from large international companies across 19 countries. The report is the first in a series looking at how Asia's rapid growth and development is expected to influence business decision making in the future.

While the world looks to China for growth, China has been seizing its own opportunities for growth around the world. Analysis of FDI data from A&O's Investment Perspectives shows that there has been a 457% increase in China's FDI outflows between 2005 and 2010, when they reached US$68 billion. China believes that its best opportunities for growth lie with India (27%), followed by the US (25%) and then China (19%).

The findings of the report also confirm the growing strength and influence of Asian economies, with Asia Pacific’s economic influence seen to be rising by 75% of those surveyed. Europe and North America received the highest scores from business leaders saying their economic influence is in decline, with 22% and 19% respectively. However, respondents in China and Hong Kong were less inclined to agree, with only 12% saying North America was in decline.

Globally, business leaders believe a Eurozone sovereign debt default is the greatest threat to the global economy; Chinese executives see more pressing concerns closer to home. One-third of respondents from China say an Asian economic slowdown is the biggest threat, followed by protectionism (17%) and inflation (15%). In Hong Kong, a Eurozone sovereign default is still seen as the biggest threat by 25%, with an Asian economic slowdown and inflation tied in second with 15% choosing both.

While China presents the best growth opportunities globally, it is also perceived as the hardest market to enter due to barriers to entry, according to 21% of executives globally - closely followed by the United States (19%), Russia (17%) and Germany (12%). The regulatory environment is identified as the largest hurdle to market entry in all of the identified top growth markets.

A copy of the 50 Degrees East: Opportunities and Challenges Report can be downloaded at www.allenovery.com/50degreeseast