Facebook is More Popular in Asia Pacific than other Global Geographies 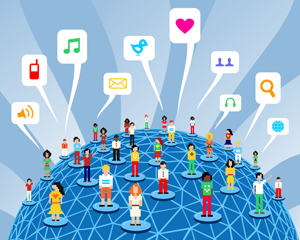 Singaporeans emerged as the global leaders for the longest time spent on Facebook, with an average of 38 minutes and 46 seconds spent per session (Table 1) revealed in an international analysis on the use of social networks conducted by Experian.

Local interest in the social networking site also continued to increase between August 2010 and August 2011 (Table 2).

Understanding the average time spent on Facebook illustrates the need for brands to be present on social networks. By knowing the average time spent on Facebook by a social network user in Singapore, will for example, mean that brands can increase the likelihood of capturing an individual's attention by rolling out digital marketing campaigns through Facebook. This underscores the need for local marketers to ensure they are putting investments for campaigns towards the right online platforms. 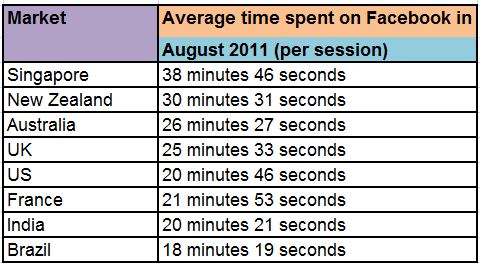 Graeme Beardsell, Chief Customer Development & Marketing Officer for Experian Asia Pacific commented: “Understanding how long people spend on Facebook in different countries is vital for any brand on the social network. With Facebook still finding its feet in emerging Asian markets like India, lower session times are to be expected. However, that doesn't mean brands should ignore Facebook in those countries, with market share for the platform in India increasing by 88% year on year, with its influence and dominance set to grow as internet penetration in the country continues to rise.”

Experian further reveals that Facebook has managed to sustain its popularity with Singapore internet users despite the emergence of Google+ this year. The social networking site managed to increase share of visits by 0.39% between August 2010 and August 2011 (Table 2). This could indicate saturation in numbers of local users accessing the site. However, the longer time spent by Singaporeans on Facebook could represent the opportunity for better engagement over the social networking platform as compared to other channels.

Singapore internet users also showed more interest in YouTube, evidenced by a 3.24% increase in share of visits between August 2010 and August 2011. This could represent YouTube being a potential competitor to Facebook for the local marketing dollar (Table 2).

For brands in Singapore and Asia Pacific looking to capture consumer attention by running digital marketing campaigns through Facebook, knowledge of behaviour is critical to developing targeted campaigns that will resonate with local audiences, Experian states. While Facebook continues its local dominance, brands should not underestimate the importance of video in the form of YouTube when looking to achieve deeper engagement with their audience. It is only with intelligent actionable customer information that brands can market forward while ensuring continued loyalty from customers, the company advises. (Source: Experian)