Gartner: Hype in 2015 around the Internet of Things (IoT) and wearables 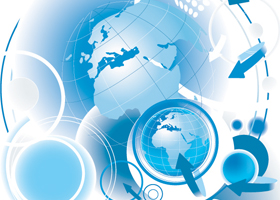 In August, Gartner has published its Hype Cycle for Emerging Technologies for the 20th time. Its central theme this year is ‘Digital Business’ and as usual it illustrates how a technology, IT method or management discipline, stacks up against others in terms of maturity.

Expectations regarding the Internet of Things and wearables are currently particularly high, according to Gartner’s report, but shows already disillusionment regarding Big Data. Gamification and Augmented Reality already is approaching the bottom, which is almost reached by cloud computing and NFC now, however, most likely expected to quickly reach the "Plateau of Productivity". It goes up on issues such as Virtual Reality and In-Memory Analytics, while 3D printing for companies is already approaching the plateau.

Connected Home and Quantified Self are stuck at the very beginning of the innovation phase, among others, Data Science in turn is already close to the hype peak and Gartner predicts a relatively short period of time here until it becomes productive.

Graph of the Hype Cycle for Emerging Technologies 2014: 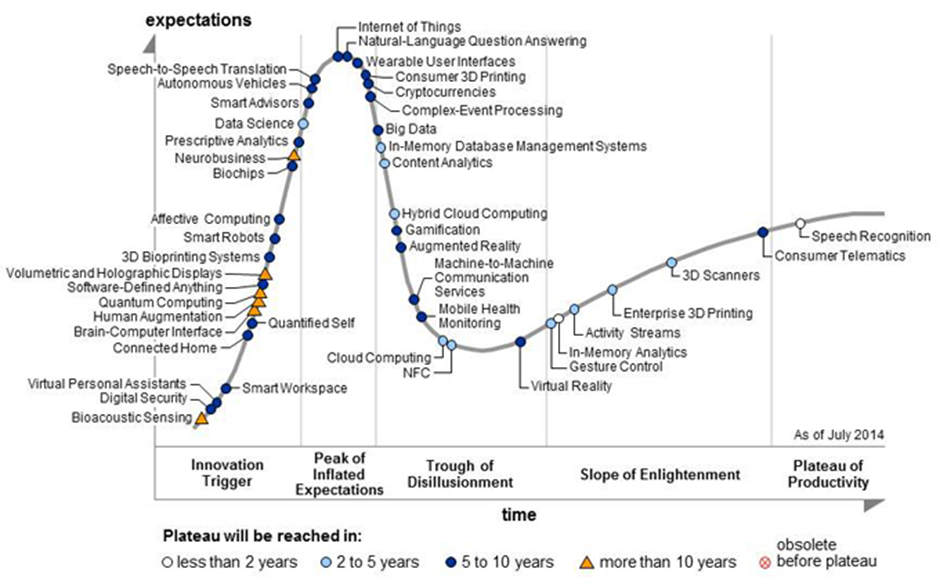 "Enterprises should use this Hype Cycle to identify which technologies are emerging and use the concept of digital business transformation to identify which business trends may result. As enterprises embark on the journey to becoming digital businesses, they will leverage technologies that today are considered to be "emerging," said Hung LeHong, vice president and Gartner fellow. "Understanding where your enterprise is on this journey and where you need to go will not only determine the amount of change expected for your enterprise, but also map out which combination of technologies supports your progression", he added.

Gartner's 2015 predictions focus, as said, on the impacts of the evolution of digital business and pays closest attention to the Internet of Things (IoT), since it has introduced new concepts for identity management (every device interacting with users has an identity) and users and devices can have complex, yet defined, relationships. Further, as the smart wearables market continues to grow and evolve, Gartner predicts that by 2017, 30% of smart wearables will be completely unobtrusive to the eye.

"Already, there are some interesting developments at the prototype stage that could pave the way for consumer wearables to blend seamlessly into their surroundings," said Annette Zimmermann, research director at Gartner. "Smart contact lenses are one such product in development. Another interesting wearable that is emerging is smart jewelry. There are around a dozen crowdfunded projects competing right now in this area, with sensors built into jewelry for communication alerts and emergency alarms. Obtrusive wearables already on the market, like smart glasses, are likely to develop new designs that disguise their technological components completely."

Besides that, Gartner made numerous further predictions about the consumer devices market that will be interesting to watch, such as:

Without doubt, the suspense will continue this year and time will tell how fast Gartner's predictions will become a reality and move mainstream in our digital business world.