FreakOut about the future of native ads 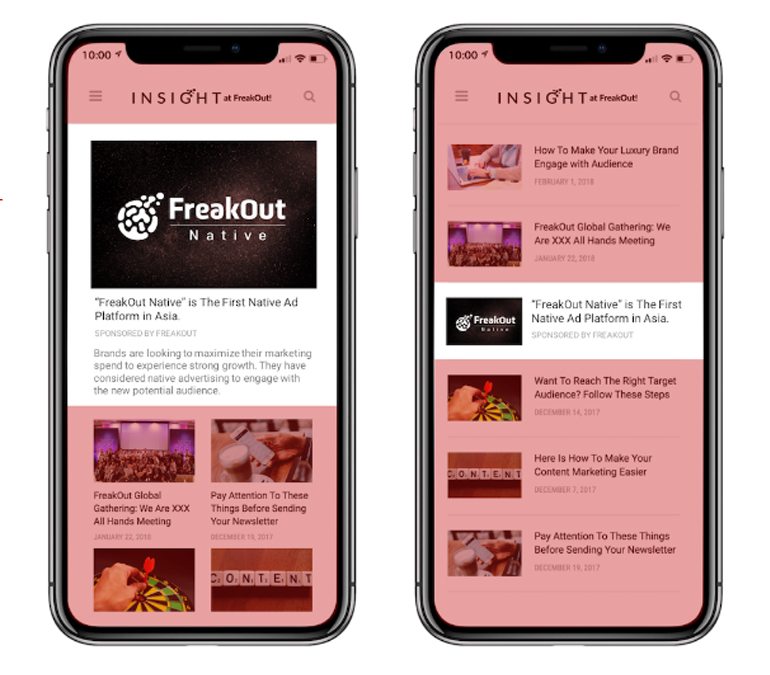 FreakOut started the DSP business in 2010 and later expanded into the DMP and native advertising businesses, all three offerings being the largest in Japan. In June 2014, the company got listed on the Tokyo Stock Exchange and then started to aggressively expand especially in Asia.

Active in Asia now for the past 8 years, FreakOut managed to be the first native ad network in Southeast Asia, convinced of native ads being the future and well-aware of the fact that by making proper use of technology, people will have more time to spend on creativity.

Technology and creativity will unleash potential of native

As we know, in the early days, mobile app developers focused mainly on attracting new users to take off globally. Intrusive mobile advertising was the result which in turn led to lower dwell time and forced the market to rethink their strategy. That rethinking leveraged the use of native ads, since they have the attributes of being effective and at the same time less intrusive.

“Native ads are created with the specific intent to promote a product, while matching the form and style of the platform's editorial staff. The association with valued content makes it impactful”, Narayan explained.

The limited screen space, generally a disadvantage of the mobile devices, probably helped a bit to enforce native advertising in the mobile sector as well: With so little scope to place banners, ads needed to be integrated into the given format better than before.

However, despite the fact that native ads show generally higher engagement rates in the mobile sector than desktop-based applications and their increasing popularity, there is still no fast growth in programmatic mobile native ads in sight. The reason why that is so is what we tried to find out from FreakOut.

Native advertising will rise – and change

Although native ads are obviously very effective, there is a catch. “Each platform presents its content in a different way, but a “truly" native ad must adapt to the format the individual media, therefore placed in a conventional, non-programmatic way. As a result, native advertising is a very time-consuming process that must be set up for each individual platform”, Narayan explained.

“While standardizing mobile native advertising is only a matter of time, publishers still need to learn to market their audiences outside of Facebook and Google”, Narayan emphasized.

Although the Interactive Advertising Bureau (IAB) has long since published a "Native Advertising Playbook", it is unlikely that the market will experience significant changes this year that go far enough to establish common standards for native advertising. Most likely, the native ad formats introduced by Facebook and Google will become a quasi-standard for ‘native in-app’ ads due to their dominance in the market - for both app monetization (on the supply side) and ad spend (on the demand side). As a result, smaller vendors will follow and copy the format - which is already happening, both at the ad platform and app developer level. Once these standards are set there's nothing in the way of mobile native programmatic realizing its full potential, since standardization is the cornerstone of programmatic buying and selling.

Anyway, ‘the shift to a mobile-first world is obvious, making it more important to watch mobile native advertising trends this year”, says FreakOut. And indeed, brands seem to have understood the shift since they started to create strategies that focus specifically on the mobile channel. Already last year, mobile accounted for almost 60% of all internet traffic and this percentage is expected to grow further this year. Not to mention that social media platforms are heavily dominated by mobile and platforms like Instagram and Snapchat are mobile only and growing fast, too

“The switch to mobile requires the development of ad formats that better fit this medium”, FreakOut said, convinced that mobile native advertising will take the lead here. Others believe the same, predicting that by 2020 the majority of mobile ad revenue will come from native advertising and that mobile will be the faster-growing advertising channel. Mobile video advertising is as well expected to grow significantly this year (from $6.72bn in 2017 to $9.90bn in 2018), causing the video ad format to continue of being reinvented.

FreakOut is hoping that 2018 will be a breakthrough year for video in native advertising — in the sense that brands embrace it more. While there are companies that already get the advantage of visual content, too many still see text as the default format. “Videos, especially those created with an understanding of social media, offer a lot of exciting possibilities for brands, publishers and audiences, promising 2018 to be a year for great visual storytelling’, Narayan said. “We are already seeing an increased number of dedicated native strategies that help maintain a synergy between the market stakeholders (advertisers, agencies, publishers and technology vendors)”, he added.

Clearly, FreakOut banks on the fact that delivering non-intrusive and innovative formats is key to better communicate and engage with customers and that content will come in the form of native video produced and delivered in vertical formats. Or as FreakOut’s VP describes it, “video is the flavor of the season, which is why we are working on a video product that will be launched soon.”

“Innovating isn’t a choice, but a must, since the market’s demands are constantly evolving”, he said, “so, watch out what FreakOut is coming up next”.