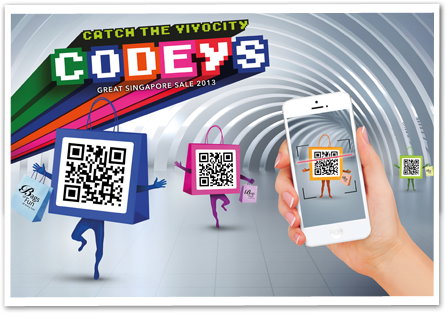 Redefining best practice in the use of QR codes, the latest Great Singapore Sale (GSS) campaign from VivoCity “Bags of Fun at every turn” is an experiential and digital campaign. It features The Codeys, giant QR code mascots, which allow shoppers to win instant prizes if they are found and scanned.

VivoCity is always on the look-out for the latest and most interesting ways to engage their digitally-savvy consumers, in order to provide the best shopping and lifestyle experiences possible. The mall’s Great Singapore Sale 2013 campaign was launched with the goal of extending in-mall engagement to online and social media engagement.

The campaign is centered upon “The VivoCity Codeys”, a family of four QR code mascots dressed in VivoCity’s corporate colours that roam around the mall. When spotted and scanned, The Codeys bring instant reward vouchers. Facebook is used as the central point to build upon engagement with the fans, and also to acquire new fans. If shoppers “Like” the VivoCity Facebook page, they gain entry into daily prize draws and can participate in the Grand draw at the end of GSS. The appearance timings of The Codeys have also been seeded through Facebook to allow people to find them easily. VivoCity also extended the campaign to include giant shopping bags placed around the mall during the week to increase publicity.

VivoCity originally engaged Dog Digital to design the creative strategy for a “quick-win” campaign that included the usage of QR codes and plans for social media fan-base acquisitions and engagement. Responding to this brief but not content with the idea of putting QR codes on posters or leaflets and hoping for engagement, Dog Digital’s team was determined to pique the interest, excitement and curiosity of shoppers. Bringing the QR codes to life in an experiential way was the goal placed at the heart of the project.

The campaign results to date have surpassed all expectations. At the time of release, over 4000 people had scanned the QR codes around VivoCity and the number of fans of the VivoCity Facebook page has increased by 33%, from 6000 to 8000 Likes.

Selene Chin, Managing Director of Dog Digital Asia, said of the campaign: “I’m very pleased to see how well The Codeys campaign is being received in VivoCity. Centering the campaign on QR code and mobile engagement lets us take the excitement of the GSS in VivoCity into their online spaces as well. Our creative studio has demonstrated their flair and sense of fun with the project concept, and it’s been backed up by fantastic results to date.”

The Codeys mascots will continue to engage shoppers in VivoCity, Singapore until the end of June, while the campaign will end on 28 July 2013.