The role and relevance of the data center continues to grow

Emerson Network Power, a business of Emerson and a global leader in maximizing availability, capacity and efficiency of critical infrastructure, released its 2013 State of the Data Center infographic. Their latest retrospect illustrates the rapid, continuous growth of feature-rich, data-intensive IT applications, and how that influences the increasing criticality of data centers.

According to Emerson Network Power, businesses are relying more than ever on data centers and are more aware of the risks and costs of downtime. Complete outages are down 20% since 2011, but financial losses owing to these outages are up 33% in the same period, with a global average of USD 900,000 for each incident and businesses average one complete outage every year, so this cost is significant.

“The data center plays an increasingly critical role in supporting operations as the world grows more digital each day,” said Russell Perry, senior director for marketing and solutions, Emerson Network Power in Asia. “Technologies have pushed the world to move at a faster pace, and businesses must keep up to meet service-level agreements with their customers.” 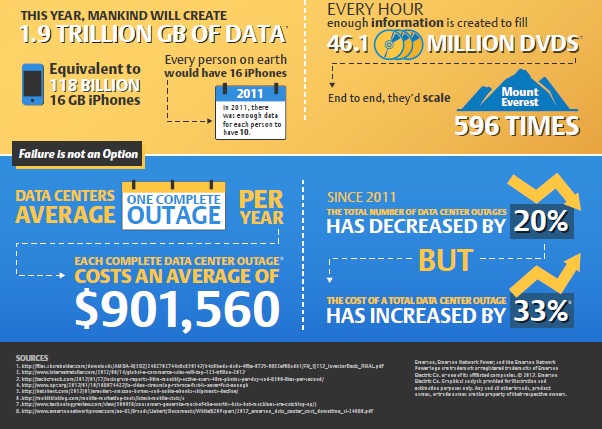 The infographic is actually a follow- up to an earlier version released in 2011, but this year's iteration reflects the following changes:

“The data reflects what we hear every day from our customers and partners, and that’s a growing reliance on the data center as an indispensable business asset,” said Scott Barbour, executive vice president, Emerson, and business leader of Emerson Network Power. “They are investing in their IT systems and infrastructures because the cost of downtime is becoming more and more prohibitive. The facts presented in the infographic confirm the relentless expansion of our society’s electronic dependence and the increasing importance of data centers.”

The infographic also shows increasing reliance on data centers in areas that were traditionally offline pursuits and consumers’ high expectations of speed and performance.