Once again, it was the USA which earned the league’s top spot, generating 14.5% of the total spam volume sent during the last quarter of the year, giving it a clean sweep of top finishes for 2013.

However, the gap to second place narrowed, with China re-emerging as a major player in the spam sending Dirty Dozen, leaping from 4.6% to 8.2%, while Russia’s spam contribution edged up from 3.0% in Q3 to 5.5% in Q4. 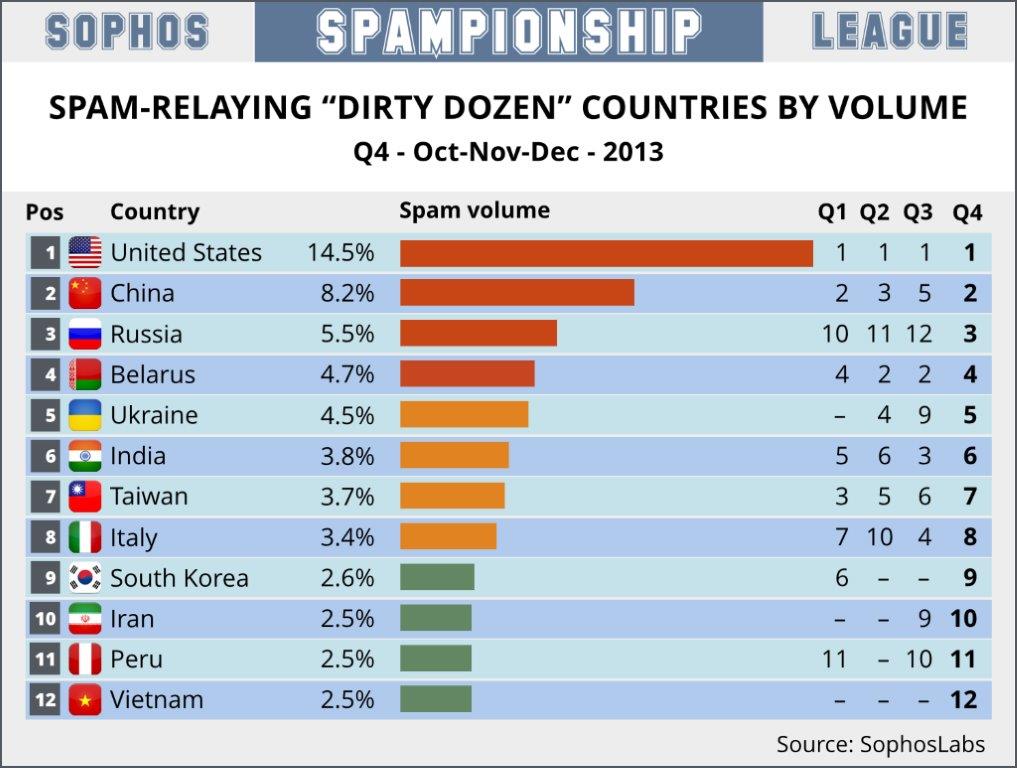 The Dirty Dozen results were compiled by SophosLabs to show where in the world the greatest volumes of spam were being sent from during the final three months of last year.

"The most obvious message from the Dirty Dozen charts is that the problem of zombified computers spewing spam is a truly global one,” says Sophos Senior Security Analyst, Paul Ducklin. “Every region of the world is strongly represented, with the exception of Africa.”

Spammers don't send spam themselves: they use botnets, or "zombie armies", of malware-infected computers to distribute their spam for them, almost always without the owners of the infected computers being aware.

“In most cases, the countries in the Dirty Dozen made it onto the list because a statistically significant proportion of their residents are conducting business online using computers that are actively infected by remote-control malware,” says Ducklin. “So the spam aspect is just a symptom - the start of the problem. Zombie malware means the crooks are already on the inside. It's up to you to turf them out."

Turning to the Spampionship table of spam-relaying countries by population, the numbers indicate the average “spamminess” per person compared to the USA. Results show things have stayed pretty stable, as Belarus retained its top spot, with the average computer there over 10 times more likely to send spam than if it were in the USA. Meanwhile other countries like Uruguay, Taiwan, Luxembourg and Macedonia continued to jockey for position in the top 12. The only significant move came from Kuwait, with figures showing there had been almost a three-fold increase in spam-relaying per capita, growing from 2.1 times the US figure per capita, to 6.07, to elevate it to second place in the table.

The Spampionship League Tables are not intended to suggest that individual nations are actively involved in illegally sending spam, but are designed to raise awareness of just how many computers are potentially infected with spam-relaying malware.

"If your country isn't in the Dirty Dozen, it's easy to feel smug, or at least complacent,” says Ducklin. “Don't do that: if you're a spam sender, Dirty Dozen or not, you are a net positive contributor to cybercrime.” (Source: Sophos)