ESET Report gets granular on cyber security knowledge, behavior and attitude in Asia

According to the Asia Cyber Savviness Report, released by ESET, 93% of online users in Asia worry about cyber security. In its recent report, the global provider of security solutions highlights that the region still has a long way to go in understanding online security and protecting themselves.

Polling 1,800 respondents from across Hong Kong, India, Indonesia, Malaysia, Singapore and Thailand, the survey aimed to gain insights into the attitudes, knowledge and user behaviors across Asia when it comes to cyber security.

The study quizzed respondents about common safety risks online in order to find out how much they actually know about cyber security. While 68 %of online users said that they are aware of online security issues, they were however often unable to answer questions regarding cyber security practices.

In the Asia Pacific region, the lack of formal education is a huge issue, the study revealed, as 4 in 10 online users said they gained most of their information about online security through unofficial sources such as doing their own online research or from their families and acquaintances.

On an encouraging note, over 78% of the surveyed respondents that didn't have any formal training about cyber security, said they were keen to learn more. Still, considering that Asia Pacific has the highest number of internet users in the world, the results of the study points out that users in this region don't know how to stay safe online. Moreover, a large share of those polled commit basic mistakes like using passwords containing easy to access personal information, such as their date of birth or surname, storing passwords and credit card details online, and connecting to unsecured public Wi-Fi networks.
Interestingly, ESET's study ranked Malaysia as the most 'cyber-savvy' nation in Asia Pacific, ahead of Singapore, India, Thailand, Hong Kong and Indonesia in that order. 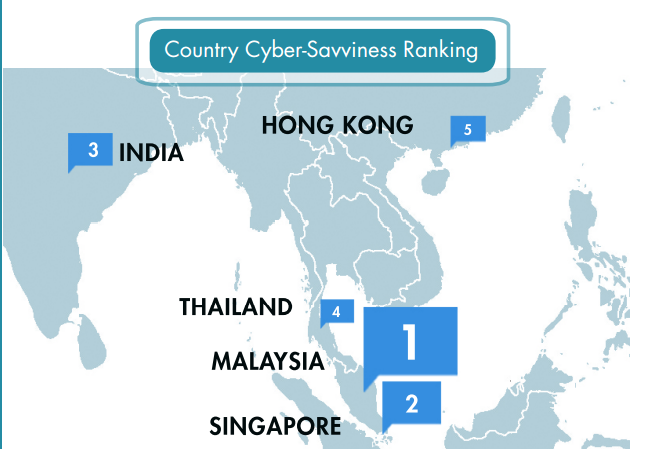 Cyber-savviness is based on factors such as the ability to understand activities likely to make them vulnerable online, risky behaviors while surfing the web, and the steps users take to protect themselves online. Surprisingly, the results showed that consumers in countries with higher cyber savviness didn't necessarily take all the right precautions, nor were they fully aware of the cyber security risks that common online activities pose.

For example, users in India and Indonesia take the highest number of precautions despite having the lowest levels of cyber security awareness. On the other hand, countries like Malaysia, Singapore and Thailand, which ranked amongst the top in ESET's awareness survey came in near the bottom when it came to protecting themselves.

"We need to bust some myths about online security," said Parvinder Walia, Sales Director APAC at ESET. "The ESET Asia Cyber Savviness Report 2015 found that users in Asia-Pacific tend to take unnecessary risks when they're online, partly due to a lack of awareness. Users have the dangerous misconception that their personal accounts and activities are not likely to be a target for hackers or might be trading security for convenience. This has to change. Information today is available at the touch of a button and the Internet is simplifying our day-to-day lives. Being aware and taking simple precautions will mean that users can stay protected online and feel confident as they take advantage of all that the Internet has to offer," he added.

The online world is evolving quickly. However, results of the ESET Asia Cyber Savviness Report 2015 showed that online users might not be aware of new online threats. For example, nearly half of the respondents in the region felt their PCs and laptops were more likely to be hacked than their smartphones and tablets. Security risks associated with social media, free applications and software downloads are also not taken seriously, with over 30% of respondents saying that they were least concerned about exposure to cyber threats via these channels.

"Hackers are like predators in a jungle -- they look for easy targets and the path of least resistance”, ESET’s Sales Director APAC warns. “The survey results show that while consumers are adopting technology quickly, they are unwittingly putting themselves at risk by not appreciating the need to secure their new devices, which can be done very easily. Similarly, activities on social media and apps can also pose some threats, but these can be protected against by knowing the fundamentals of cyber security”, he concluded.