In collaboration with the Interactive Advertising Bureau Singapore (IAB Singapore), eMarketer released its first digital ad spending forecast for Southeast Asia. The forecast projects double-digit growth in the region in 2017, as consumer usage of mobile, video and social drives up spend. 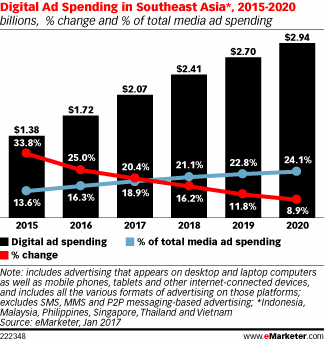 The report provides individual forecasts for total media, digital and mobile internet ad spending for six markets in Southeast Asia: Indonesia, Malaysia, the Philippines, Singapore, Thailand and Vietnam. It also includes estimates for two other markets—Hong Kong and Taiwan—that are relevant to the region from an operational standpoint, if not part of Southeast Asia geographically.

eMarketer drafted initial estimates based on an analysis of the macro-level economic conditions in the region, historical trends of the advertising market, estimates from other research firms and consumer media usage data. Estimates were then updated after being vetted by member companies of IAB Singapore, with input from agency executives, publishers and research companies in the region.

For Singapore in particular, the forecast projects digital ad spending will reach $376.5 million this year, accounting for 23.8% of total media dollars. That percentage is projected to grow to 30.8% by 2020. By then, the forecast expects mobile will make up four of every five digital dollars spent.

Digital makes up a smaller portion of total media spend in Indonesia, Thailand, the Philippines, Malaysia and Vietnam. Internet and smartphone penetration rates are still relatively low in developing parts of Southeast Asia—leading to a comparatively lower digital share of total media spending, said Shelleen Shum, senior forecasting analyst at eMarketer. “As internet and mobile connectivity in Southeast Asia develops in the coming years, this presents a unique opportunity for advertisers to tap into a new market of fast-urbanizing middle-class consumers,” said Shum.

Miranda Dimopoulos, CEO and ambassador to Southeast Asia at IAB Singapore, commented: “Southeast Asia is beautifully diverse, with digital providing connectivity within markets and beyond. We can tangibly see that it is digital’s time to shine even brighter, so experiences keep getting better, smarter and more meaningful. We intend to review these figures every six months, and look forward to participating in the conversations these reports will no doubt trigger.”

Subscribers to eMarketer PRO can access the report here. As part of this special collaboration with the IAB Singapore, the report is also being made available at no cost to those who are not eMarketer PRO subscribers.