Seeking opportunity in a ‘Robopocalypse’ 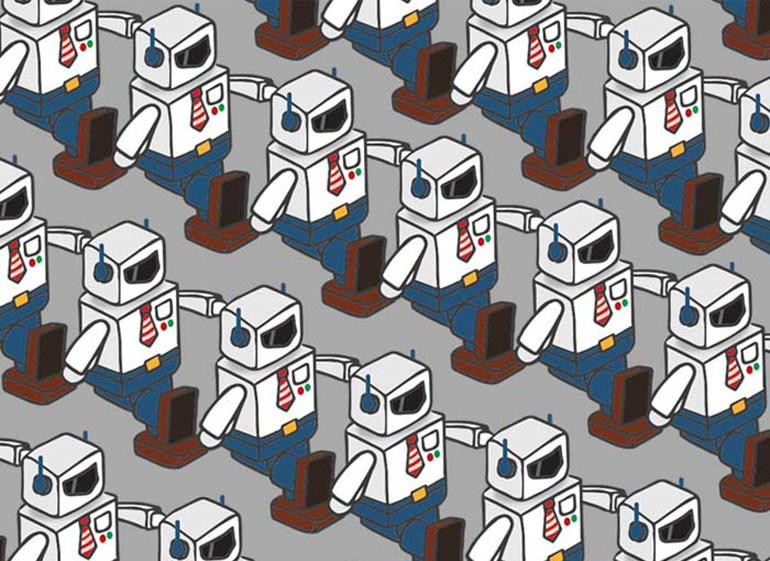 We’ve heard it all before. Robots ‒ those elusive job munchers ‒ are making their way to an office near you. And the message is clear: they are smarter than you, they are cheaper than you, and they won’t vie for the corner office… like you. If it’s not YouTube, it’s our friends at TED who splatter our screens with stats and remind us to stay afraid, very afraid of the imminent robopocalypse. After all, it’s not just the postmen and snow ploughers and plumbers who face the dirge; the professionals in white coats and collars have reason to steady their knees when pit against the innovative power and pace of artificial intelligence.

Don’t believe it? The fact is, it’s already been happening for years. Just think about how easy it is now to check in your own baggage at the airport. Only a few years ago, we were at the whim of airline staff to do it for us. Or how about when you would plunk your groceries on the conveyor belt and watch the friendly cashier scan your cookies’ bar code? Now it’s your job, my friend. The milkman who knew your name? The travel agent? The DVD shop that boomed on Friday night? All of them ‒ gone. A distant memory.

To think the march stops here would be downright absurd. It’s only the beginning. So putting our heads in the sand of the great disruption debate is not an option. We need to think around this clearly.

If you are an employer, constantly squeezed by margin pressure, looking for efficiency, what do you do? Do you invest in technology, knowing that you could render your workforce redundant? (After all, you still attend those town hall talks that say “it’s all about people ‒ not silicon chips and profit.”) Do you hold your nerve in the hope it will never happen ‒ only to have your competitor make the leap and grab the corner advantage? And for you, the employee ‒ what do you do? Join a picket and start marching?

We don’t think that any of these are smart options. Working the problem collectively is where we think the answer lies. The reality is, only some tasks are facing immediate replacement, and so it is in those spaces, where time and money find new slack, that we must seek out fresh innovative seed. Beyond the obvious but short-sighted solution of reducing staff numbers, how about thinking long-term and forging new value out of unique circumstances? Perhaps humanity doesn’t have to end up “on their knees”, as Robopocalypse author Daniel Wilson suggests. Perhaps there’s the whiff of reinvention in the air.

Don’t get us wrong. There’s good reason to perk up ‒ maybe even panic, if that’s the fuel needed to move into new paradigm thinking. But McKinsey’s latest report on automation displacement reminds us that, although almost every occupation has partial automation potential, humans will remain an essential ingredient in the future workplace equation. Even those jobs that can be easily automated, such as nursing or teaching, rely heavily on interactions between people and expertise that stretches beyond the knowledge of facts.

Where the design and construction of cities of the future depend on public participation, the role of human creativity and ingenuity will keep rising to the top. And for machines that excel at analyzing structured data, creative thinking will always remain gold, which is why future-thinking organizations are placing more emphasis on innovation and fostering creativity.

So, while a future with AI might mean the factory floor is inhabited by more affordable, time-efficient robots, designers and engineers will have more time to imagine, create and build; clients will have more choices; and niche opportunities will find new traction.

Others would say that AI and robots are creating a whole new job crop. Although an estimated 78% of predictable physical jobs in the US (such as packaging, food preparation and assembly line work) are under replacement threat, robots will never have the technical world waxed. So long as there are machines, there will be glitches and maintenance and updates required. All the more, we’ll need skilled labor and expertise to manage and maintain these emerging technologies. The robot will need replacing, the driverless car will need a tweak. And odds are good for still some time, it will be the human hand to do the fixing.

New jobs will open up. Just as digital has given birth to the IT world, with titles like ‘network administrator’, ‘field service technician’ and ‘web developer’ now mainstream occupations, so too will the same phenomenon unfold in science, technology, engineering and mathematics. Furthermore in other fields, according to a 2011 study, jobs are likely to triple from automation. Experts say, for every one million industrial robots created, nearly three million jobs are directly needed to support them. They even argue unemployment rates will drop, as they did for five of the six countries examined in the study.

Are we taxing the wrong ‘people’?

Indeed, the subject is a bit more complex than a one-sided end-of-the-world scenario. We can envision a future of coexistence, but we must ask the big questions now and ensure that conscience leads the way. Should robots be taxed like normal citizens, as Microsoft co-founder Bill Gates proposes? It could be a way of slowing down automation and even funding jobs in human-centered sectors such as caring for the elderly and teaching children. And what’s stopping us from asking, should we ban robots in some industries altogether?

These are the questions we need to be asking. These are the grey areas we need to define. If we do it well, if we stay agile and inventive, and if we keep eyes peeled for opportunity, we’re likely to dodge our own demise and remain the future’s authors.