Why throwing tech at a project doesn’t ‘future-proof’ it 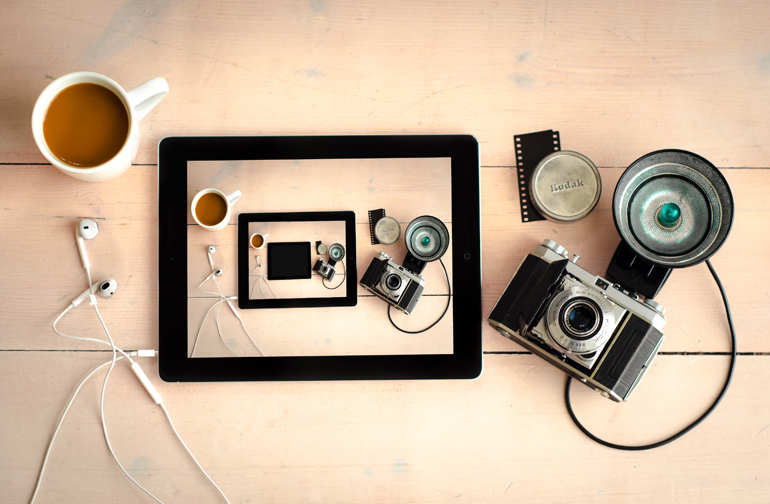 The smartphone (tech) era allows us to capture every good (and bad) hair day down to the finest detail and the selfie has become as routine as brushing one’s teeth, yet – retro-styled mechanical cameras that go ‘click’ and spit out faded photos are making a gigantic comeback. Fujifilm, makers of the popular Instax camera, sold 5 million of these last year, representing a 30% increase year-on-year. What’s more, this analogue camera is outselling digital devices four times over.

Why is this throw-back, analogue technology enjoying such popularity? Is ‘retro’ just a passing flashback ‘fashion’ trend or is there something deeper at work?

Professor of Leadership and Innovation Roberto Verganti believes that “What makes people really passionate is not a solution; it’s the discovery of new meaning”. Could it be that an (instant) image in hand represents something ‘authentic’ and ‘real’ in an age of high-resolution yet all too often edited, retouched or #filtered?

The Fujifilm camera has managed to capitalise on an era in which authenticity is sorely lacking and develop that (pun intended) into a thriving business opportunity. It’s also a reminder that the people at the centre of our designs are just as important as the technology we’re expecting them to use.

Digital photography is gaining ground; but if users aren’t keeping pace, they risk alienating their own market. Put another way: throwing tech at a project or product does little to future-proof it.

The world of manufacturing is littered with tales of woe – products that possessed technical superiority, yet were ‘beaten’ by lower tech rivals that managed to capture the hearts as well as the minds of the users.

The video cassette recorder (VCR) ‘war’ saw the Sony betamax video recording system lose out to the VHS despite being technically superior. Sony hadn’t made a flawed product, but they’d misjudged the home video market. Their one-hour recording limit wouldn’t cover a baseball game or a movie and consumers flocked to own tape formats that could record two hours or more. Betamax was, in theory, a superior recording technology in terms of resolution, sound, and a stable image as well as recorder quality, yet these differences were negligible to consumers.

In 1972, the Nakagin Capsule Tower was dubbed ‘the future of housing’ and its sci-fi appearance had everyone predicting that similar capsule towers would eventually dot the Tokyo skyline. Today, however, only 40 residents remain – the tower was the first and last architecture of its kind to ever reach completion and is a monument to a path not followed. Its cardinal error was the failure to test how its user’s interaction with technology might evolve. The round, frosted glass windows were a ‘technical’ feature, but made living inside the capsules unbearably bright.

Today’s developers (and engineers) are faced with the challenge of designing buildings for a future person living in a futuristic world. Given lengthy project design, approvals and funding processes, it could take years for a project to move from concept to completion – and after this period of time, the original design is no longer ‘new’. How do they know what to design when they don’t know what is to come?

The implementation of technology for technology’s sake isn’t enough to sustain a product or infrastructure into the future, without a sense of purpose or meaning inappropriate technology can ironically shorten a project’s lifespan rather than increase it. An intimate understanding of a user’s technology needs today and how these might evolve is key to future-proofing any product, process of infrastructure.

QV.1, a 40-storey modernist skyscraper in Perth, Western Australia was completed in 1991. The fourth-tallest building in Perth, architect Harry Seidler won numerous awards for its innovative design and energy efficiency. Despite the advent of Green Star and new technologies, 15 years later, QV.1 and its sister designs in Melbourne, Brisbane and Sydney are still highly desired and very functional premium grade office spaces. Harry understood how to ensure a project’s relevance long after inception.

Likewise, the Aeron Chair has outlasted fad. A radical design at the time, its performance is as good today as it was in 1994 and it is featured in the Museum of Modern Art‘s permanent collection. According to Bloomberg, the Aeron Chair “made a fetish of lumbar support…because that’s what people think is required for it to be a scientifically ‘good’ chair”. Their understanding of consumer expectations paid off – with the chair dubbed ‘America’s best-selling’.

And for a technological equivalent, look no further than the computer mouse. In 1980, Apple asked IDEO to develop a mouse for their new computer, the Lisa. It is as good today as it was back then. The Apple mouse was required to be more reliable but less than 10% of the cost of the earlier version. Their improved and cheaper mechanism proved mechanically and economically sound and was changed only slightly for use on the first Macintosh computer. This basic mechanism design is now used in virtually all mechanical mice.

All of these examples were designed to address widely different but very explicit meanings for their users – causes which have proved timeless.

As we move deeper into the digital age, technology with real meaning and value for the user will rise to the top of the pile of all things digital. Likewise, the places and spaces we inhabit must be aligned not only with our technology needs now, but also going forward.

Fujifilm’s camera was able to transcend a couple of decades of relatability because it speaks to the core needs of the user – it answers the call of humanity for meaningful technology. As we move into a technology-saturated market in future, designing our projects to fulfil a range of meaning or purpose for the people that will live, work and play in them will see us start to future-proof our designs.

As a big fan of Aurecon’s Just Imagine and glimpses into the future, Asian eMarketing thanks this time Matt Capon for the contribution.