The University of Massachusetts Dartmouth investigated again how the Fortune 500 use social media. The survey shows that the experimental mood of the American big players is slowly gaining momentum and that there is no way to get around LinkedIn. LinkedIn is by far the most used social network among the Fortune 500: 94% of the companies have a presence there; Twitter is ranked third place with 79%, just behind of Facebook (80%), and reported growth in contrast to Facebook and the fourth-placed YouTube that lost 5% and has now 45%. Blogging declined among the Inc. 500 for the first time in 8 years in 2014. 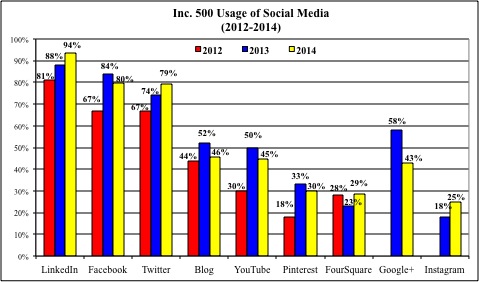 Being listed as No. 5 and 6 of the most used social media are Pinterest (30%) and foursquare (29%), where slightly more than half of the Fortune 500 can be found. Google+ is used by 38% of the companies and could gain 3%, and significant increases are also seen on Pinterest and Instagram, which are currently used by 36% and 20% of the Fortune 500. CEOs, however, still hold their fire.