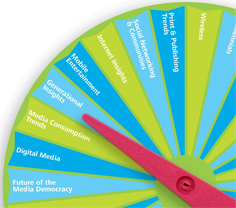 According to Deloitte's "State of the Media Democracy" survey, U.S. consumers embrace multiple digital devices, leading to explosive growth in tablet and smartphone sales and multi-tasking while watching TV. The American population's voracious appetite for digitized information and entertainment continues unabated, creating a groundswell of consumers who move seamlessly between smartphones, tablets and laptops to consume digital content, often using multiple devices at the same time.

Deloitte's seventh edition of the "State of the Media Democracy" survey reveals a 160% growth in the number of digital omnivores – those consumers who own a trio of tablets, smartphones and laptops -- with this group representing more than a quarter of U.S. consumers. The survey compares and contrasts generational preferences of over 2,100 consumers, ages 14 and older in the U.S., revealing significant technology, media and telecommunications consumption trends including attitudes and behavior to advertising and social networks, mobile implications, consumption preferences across platforms and devices, and the Internet.

"Digital technology has emphatically triumphed in its penetration of the modern consumer lifestyle," said Gerald Belson, vice chairman, Deloitte LLP and U.S. Media & Entertainment sector leader. "While that trend line has been well documented, the surprise is how thoroughly digital tools have become essential across all age groups and consumer applications in the past year. This new reality creates opportunities – and an imperative – for organizations to differentiate themselves by utilizing multiple platforms to reach prospects and serve their customers."

When analyzing the ways in which Americans utilize their devices, the survey found that tablet owners stream movies 70% more often than non-tablet owners and intend to watch movies more than any other video content in the next 12 months. The use of multiple devices occurs even inside the home, as more than 80% of consumers are multi-tasking while watching TV.

"The explosion of media-capable devices has had a striking impact on consumer behavior that poses interesting challenges for the entertainment industry and longstanding business models," said Alma Derricks, director, Deloitte Consulting LLP. "More than half of consumers have their TVs connected to the Internet in some way, and that group watches TV content from online sources over 40 percent of the time. This behavior impacts both the entertainment and advertising industries, and highlights the continued importance of using multiple platforms and devices to build brands and engage consumers."

More than just a gaming console

Twenty percent of consumers rank videogames as a top three media activity, including mobile and social gaming in addition to consoles. In the last year, online video-gaming subscriptions have increased by 47%, and millennials' buying decisions are more influenced by advertising on videogames than any other generation.

The survey reveals that 93% of Americans rank Internet access as the most valued household subscription, and 72% of U.S. households have a computer network or router (up 20% points in the past year). More than half of all consumers are willing to pay a premium for faster Internet connection, with tablet and smartphone owners more inclined to pay for faster connections as the intent to consume more content over the Internet continues to grow.

"Digital technology continues to transform the high-technology, media and telecom industries, and we expect the pace of change to accelerate in the next few years," concludes Belson. "The proliferation of new devices and customer segments opens up new doors for engaging with customers and finding opportunities for growth and innovation." (Source: Deloitte)