The results from Havas Media Group’s 2013 Meaningful Brands statistically reveal that the top “meaningful brands” outperform the stock market by 120%, and demonstrates in hard financial terms how the relationship between people and brands can benefit from measuring, communicating and delivering increased well-being.

Despite this, Meaningful Brands uncovers that this disconnect between brands and people continues - with people not caring, if half of all brands in Asia Pacific ceased to exist. These regional results however demonstrate a huge opportunity for brands in Asia Pacific to make a difference with much higher levels of brand attachment than the rest of the world. At a global level people would not care if 73% of brands disappeared tomorrow.

Meaningful Brands - Havas Media Group’s new metric of brand strength - is the first global analytical framework to connect human well-being with brands at a business level. It measures the benefits brands bring to our lives. It’s unique in both scale – 700 brands, over 134,000 consumers, 23 countries - and scope.

In Asia Pacific, the project includes findings from China, India, Indonesia and Japan and measures the impact of the brand’s benefits alongside its relationship with12 different areas of well-being - such as health, happiness, financial, relationships and community among others - for a full view of its effect on our quality of life.In APAC, the analysis took in the views of 10,000 people for 87 brands in 4 countries.

Vishnu Mohan, CEO of Havas Media Group, Asia Pacific commented: “The Meaningful Brands analysis is especially powerful and pertinent for Asia Pacific - commonly predicted to be the new birth place of the next generation of global brands. Unlike Europe and the US, more people in Asia Pacific believe that brands are playing a role in improving their well-being. They are also more positive towards brands in general. Brands in APAC have more to gain by reinventing themselves so that they are more focused on the creation of positive and tangible value. Meaningful Brands helps them do this by measuring and tracking their impact on our day to day well-being – both to ourselves as individuals and to the societies and communities we care about. For the first time, we can see from this year’s analysis the clear business and financial rewards open to companies who are investing in building meaningful brands. And we can also see that sentiment in APAC provides us with a promising and welcoming area to build them.”

Among all the regions, Asia Pacific records the strongest relationship between consumers and brands with 53% of people acknowledging that brands improve their quality of life. These figures are relatively high when compared with the percentages of 28/29 found in Western Europe and the US.

Continuing the trend from 2011, only 20% of brands make a significant, positive difference to people’s well-being, with a strong and growing gap between developed and emerging markets (Europe 5%, USA 9%, LATAM 27% and Asia 39%). Although, on a global basis, most people would not care if 73% of brands disappeared, this relationship between people and brands differs widely amongst markets with a strong polarization between developed and developing markets.

Consumer optimism, expectations and the future for brands in APAC

The findings demonstrate that a larger number of meaningful brands are likely to come from growing markets rather than Western markets. Brands in these developed regions recorded alarming levels of disconnect with our lives, pointing to a need for them to radically reinvent themselves to reconnect with people or risk becoming increasingly commoditized.

As opposed to Western economies, people’s expectations from brands in Asia Pacific are relatively well met. In India and China, 61% and 68% of people trust brands. This figure was significantly lower in Japan with 46% and Indonesia with 53% of trust levels in brands. 71% of people in Indonesia, 75% in China, 82% in India and 63% in Japan agree that large companies should be actively involved in solving social/environmental problems. Further, 67% of people in India, 66% in China and 62% in Indonesia think that brands can play a role in improving their quality of life and well-being. The expectation of Japanese consumers was significantly lower at 37%.

SK Biswas, Chief Strategy Officer of Havas Media Group, Asia Pacific said: “The majority of people across the three markets covered share a similar expectation from brands - to play a role in improving their quality of life and well-being. It’s less and less about one benefit or an attribute and more about consumer expectations, which has shown a manifold increase and goes beyond product delivery. It has now become critical for marketers to move up the marketing ladder from product based approach to a holistic approach. The message from Meaningful Brands is loud and clear. If businesses and brands understand its importance and respond, they will not only create a long-term sustainable brand, but they will – as our analysis proves - financially prosper.”

The numbers clearly indicate developing Asia (India, China and Indonesia) has more disposable income, but less time and people are trying to simplify and organize their life better to adjust to these trends.

Move towards the individual? Maybe for developed markets but not for APAC...

Since 2011, enhancing our individual quality of life and personal well-being has become increasingly important in Western economies. In emerging markets, people place relatively more importance on a brand’s impact on their community and environment. At the same time, people in India, China, Indonesia and Japan increasingly expect that brands enhance their individual and personal lifestyles, as many brands in these countries become aspirational symbols of an improved standard of living and status.

The importance of brands delivering on personal benefits has seen an increase, with the US seeing a jump of 5%, Europe 2% and Asia 2%. However, when looking at the data from the top performing brands, the majority take a holistic approach, balancing and contributing to both our personal well-being as individuals and to the collective well-being of our societies.

It is noteworthy that people in Japan demonstrated a lower level of trust in 2012 compared to 2011. Even though at 46% Japanese consumers show a lower level of trust than consumers in emerging Asia, the trust levels are still at a higher level than developed markets in Europe and USA. This can be attributed to the economic situation and the disaster in 2011. Brands like Toyota, Panasonic and Uniqlo which undertook on ground activities during the disaster and extended a helping hand register higher levels of trust and ranking on the list of Meaningful Brands.

The Meaningful Brand Index (MBi) forms the core of the Meaningful Brands framework. In 2013 it shows significant shifts in both sectors and brands since its last report in 2011. This year, half of the top ten brands are technological companies: Google takes the lead, followed by Samsung, Microsoft, Nestle and Sony as the top five, and IKEA, Dove, Nike, Wal-Mart, DANONE, Philips and P&G as the next in line of meaningful brands of 2013 (see infographic below).

Across the four markets in Asia Pacific, China is the only country where ITC brands figured prominently amongst the most Meaningful Brands followed by Food & Beverage. The top ranked brands in China included Taobao.com, Haier, Nongfu Shanquan, Philips and IKEA.

In India the top five brands are from the mix of sectors ranging from Food & Beverage, Automobile and ITC. LIC was ranked the top Meaningful Brand followed by Britannia, Cadbury, Sony, Samsung and Parle - G.

In Indonesia automobile brands are the best valued, followed by finance and insurance: Aqua (from Danone) is the top ranked brand, with second ranking going to Honda, followed by Indofood, Nestle and Pepsodent.

In Japan, the top five brands are largely local with the exception of P&G which was ranked No.1, followed by Panasonic, Uniqlo, Toyota and Sony. These brands are all seen to positively and concretely deliver on a range of well-being dimensions, across both personal and collective, in addition to have a strong product/service offering.

An interesting trend, which is being seen in emerging countries in Asia Pacific and Latin America, is the dominance of local brands among the most meaningful brands in respective markets. These brands are usually from a varied set of sectors. Some examples include Oil Company Petrobras and cosmetic brands Natura in Brazil; Food & Beverage brands Bimbo, Jumex and La Costena in Mexico, insurance brand LIC in India; ITC player Taobao.com in China and FMCG brands Indofood and Aqua in Indonesia. (Source: Havas Media) 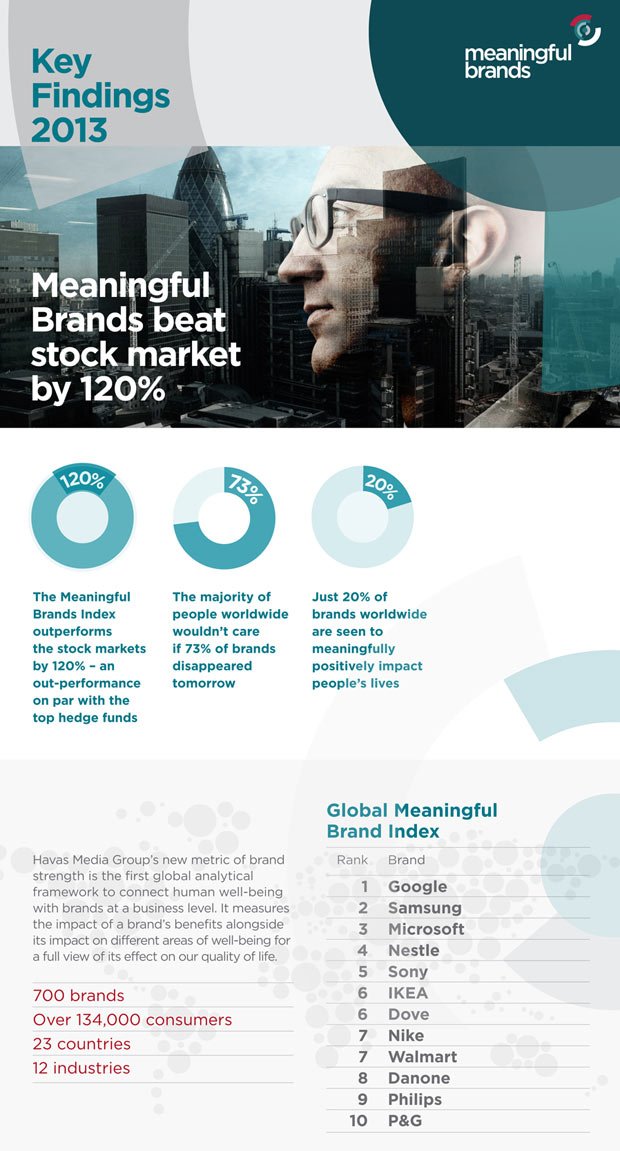