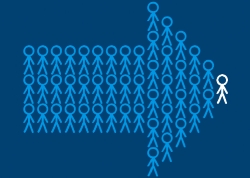 A recent study by Forbes Insights, Rocket Fuel and Spencer Stuart presents the latest developments in dealing with Big Data. The group interviewed nearly 300 senior executives in September/October 2014 for their worldwide survey, including 21% from the Asia Pacific region.

Although the use of large amounts of data in marketing already plays a big role in our industry, the potential for growth is still huge.

Companies are increasingly investing in technologies for digital advertising, as well as technology partners or in-house experts. According to the study, almost 75% of the companies surveyed encourage their staff with further developments regarding data analysis.

The corresponding report, Data-Driven Insights Are Only Part of the Journey: Today's Best CMOs Take Action reveals the following findings:

For more detailed information, download the study - for free.