A pivotal year for social: Brands can only survive if the people and networks love them 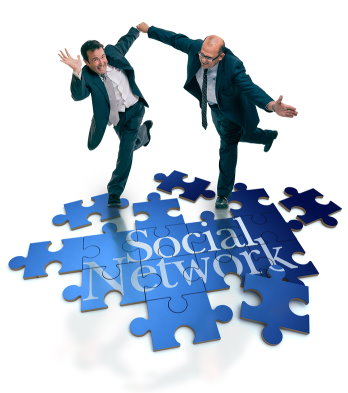 The web in all its diversity has become a new stage of life as nothing is more human than what happens in social networks. More than ever, especially for 2013, it means for brands that they can only survive if the people and networks love them.

Just as in the past we met at the market or in the pub, today we are meeting on the web. Those who drew the curtains up, so that we could look into their apartment once, are now granting us insight into their sanctum via webcam. The usual gossip is now taking place on opinion portals, chat rooms and forums.

On the Internet we also find all the little things that make us so human: personal vanity (ego-surfing and likes), the desire for attention and recognition (rankings), and a high talkativeness (blogs, Twitter, YouTube, etc.).
Like in a village, where everyone knows and controls everyone, and therefore a person’s behavior has huge implications on the individual perception, social control is taking place worldwide on the social web. It always responds emotionally, like the people that represent it, which means thumbs up or thumbs down, without much mercy. And offers are only worth something if they have active support of potential friends, fans and supporters, as people always watch what others like and are geared to.

There are opinion portals, user forums, reviews, press releases, word of mouth and referrals that are playing an increasingly important role. These so-called "earned touchpoints" are useful, as they can’t be bought, but have to be earned instead. Google calls them the "Zero Moments of Truth" (ZMOT), as acquisition compliant customers decide decisively as the new marketers about the future of a company.

Only the really good ones make it

The Internet is like a giant, public panel discussion. Obscure cover-ups and marketing lies are a phase-out model in this scenario and inferiority gets ruthlessly rejected. Not only the figures, but the moral balance must be spot-on in the future. The new business mantra is being “really good” so that people spread the word of your commitment! Or in other words: whoever plausibly helps to make the world a little bit better, will achieve the best results in the future.

Years ago, the market players could still spread their advertising rubbish nonchalantly out into the world. But today everything you do produces a public response. If it is negative, it can sensitively harm your image and turnover. And even if it is positive, companies need to moderate. Digital word of mouth has become almost something like a civic duty.

The biggest recommendation engine that ever existed is called social web. Thus, listening to the people in cyberspace and to act accordingly is the most important obligation of a company nowadays.

In such a scenario, only products, services and brands can survive:
• which people find meaningful and useful;
• which the own network and / or the public adores;
• which someone can "fall in love" with.

Whoever can fulfill these expectations can automatically gain a good reputation, loyalty, valuable new business, and ultimately profit. Fact is that the truth sells best and being proficient is crucial.

The winners and losers of tomorrow

Within the next five years, all sectors and industries need to reinvent themselves in a social way, said Facebook founder, Mark Zuckerberg, already in October 2010. So, there will be winners and losers in a “social” and “mobile” forward-driven economy.

Besides, following Erik Qualman, the author of Socialnomics, the losers will be most likely traditional advertising and offline media, large corporations that act like lumbering tankers; companies that fatten themselves to the detriment of the community, that are interchangeable as they are mediocre and don’t attract talent, or mistreat their employees and the environment.

The winners, on the other hand, will be those companies that offer useful products and excellent service while living moral values, companies that maintain openness, dialogue, loyalty and trust, and have a lot of fans and dedicated multipliers. Or in other words, the winners are simply the customers and consumers, networks, alliances, collaborations, the environment, humanity, society and democracy, and consequently word of mouth and referral marketing.

International Data Corporation (IDC) confirms that social media will continue its penetration into the enterprise space, but often without the involvement of the IT department.

"2012 was a tumultuous year for social media – most notably because of the notorious Facebook IPO and all the questions about the efficacy of social media that surrounded it,” says Claus Mortensen, Principal for Emerging Technology Research, IDC Asia/Pacific. He expects changes across the board in 2013 in the following areas:

Further, IDC expects CIOs to be the ones who push back when their business units ask for social applications.

“Since they feel that their skepticism about social media has now been validated, they will insist on a proven ROI - even more in 2013 than they did in 2012 – and this ROI is still difficult to show. But this reluctance by CIOs may end up creating more problems than it prevents.”

Drawing from the latest IDC research and internal brainstorming sessions amongst IDC's regional and country analysts, the following are the top 10 key Social Business and Social Media predictions in 2013:

Prediction 1 - The Facebook IPO will polarize the social enterprise market

IDC expects 2013 to be a year where companies and CIOs will be divided into two camps because of the Facebook IPO and all the questions about the efficacy of social media that surrounded it. One camp will continue to explore social as a foundation for their business; the other will see the developments of 2012 as confirmation of their doubts about social media and therefore about the value of social applications. This latter camp will make it very difficult for vendors of social software and solutions to capture mindshare among CIOs in 2013, and many will move their focus to the individual business units within the organizations they target.

Prediction 2 - CIO reluctance to social will create islands of IT

As many CIOs continue their inertia with regards to social enterprise applications, more and more business units will start to adopt their own solutions without involving the IT department. Ultimately, this will create islands of IT deployments within the organization. If CIOs do not become involved in 2013, the choices of the individual business units may become so embedded in the business processes that future consolidation efforts may fail.

Prediction 3 - OS and device integration will accelerate social but …

Microsoft and Apple alike are putting a lot of focus on integrating social into the newest versions of both their mobile and their desktop operating systems (OS). This not only makes social media a more seamless experience for the user but it also allows for more seamless integration of social media into the applications that are being used. IDC expects CIOs to adopt Windows 8 as a platform of choice for enterprise-issued media tablets and this will in turn help social media penetrate business flows even more. But IDC expects this attempt to "corporatize" their employees to fail in many cases. Windows 8 tablets will only become broadly accepted work devices if they win the hearts and minds of the consumer - if not, many companies will see their employees ditch their company-issued devices in favor or their own in 2014 and beyond.

With the advent of more embedded access to social media, an increasing number of companies will start exploring social platforms for collaboration purposes. As they do so, IDC expects many organizations in the region to deem the free services to be "good enough" for their needs and only consider premium solutions for core groups of employees who can demonstrate an absolute need for them. Free and freemium services will therefore capture a lot of the market in 2013 and eventually undermine the market for premium Unified Communications and Communications solutions.

As marketers are gaining experience with using Facebook and other online platforms for their marketing campaigns, IDC expects them to become gradually more demanding with the ROI of the campaigns they run in 2013. IDC expects the value of "likes", fans and followers to be seriously questioned in 2013 and for marketers to focus on out-come based ROI for future campaigns.

Prediction 6 - Visual social will be the next wave in social

As the appeal and relative efficiency of visual campaigns to text based campaigns becomes increasingly obvious to marketers, IDC expects social networks to follow suit and increase their focus on visual social networking in 2013.

Prediction 7 - Social (networking) platforms will be the next shop front

As companies around the region are moving towards multi-channel environments for their sales, marketing and customer care organizations, social networking will move beyond just being a platform for PR and marketing activities to becoming true social business platforms. IDC expects major social networks to at least experiment with B2C shopping solutions in 2013.

As the US company Groupon continues to struggle and face competition from countless similar local services in the region, IDC expects this group-buying business model to fade away in 2013 as the demand moves to other types of group-based buying such as group purchasing via social communities, event-driven online bargain sales and, ultimately, SoLoMo (Social Local Mobile).

Although mobile advertising is still in its early stages in the region, it is expected to become a US$ 3 billion market in 2013. Even so, there are many unanswered concerns surrounding mobile advertising, including the efficacy of ads on small screen sizes and the reaction of consumers to mobile ads. Despite promising early click-through rates, IDC expects the short comings of mobile as a platform for display ads to drive to focus of advertisers towards mobile apps by the end of 2013.

Telecommunications operators and Over-The-Top (OTT) content providers have historically had a strained relationship. But OTT providers are now moving into areas that mobile service providers in particular have seen as their future domain - one of which is mobile advertising. Many mobile operators have been relying on their extensive mobile customer data to secure their space in mobile advertising, but today's ad networks already have very effective targeting technology in place, leaving OTT players very little incentive to cooperate with mobile service providers. But as the mobile platform is becoming increasingly important for bandwidth heavy, media rich content provisioning, IDC believes that this may change in 2013 and that OTT players will start seeking more alliances with mobile operators in the region.

Right now the new business world first of all has to be fully understood to become a winner – so read about all things digital in the region and stay tuned with Asian e-Marketing.