eMarketer: Nearly three-quarters of Facebook's ad revenues will come from mobile this year

One billion mobile Facebook users are setting the pace

eMarketer estimates further that over 70% of all Facebook users globally will be mobile this year, and by 2018, more than three-quarters of the social network’s audience will access the platform via mobile phones on a regular basis, totaling 1.34 billion users. 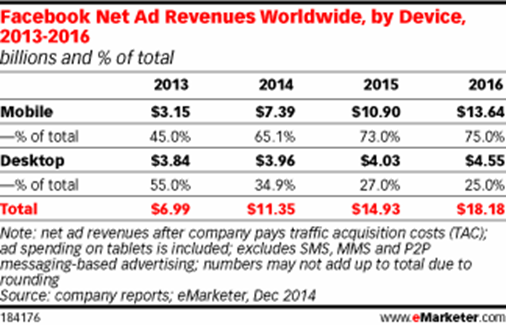 “Facebook has been a leader helping marketers to transition to mobile advertising,” said Debra Aho Williamson, principal analyst at eMarketer. “Because the Facebook experience is basically the same across devices, advertisers don’t have to reinvent the wheel to place mobile advertising. As Facebook’s user base shifts even more heavily toward mobile, it is well positioned to see increasing ad revenues from this channel.”

Overall, there will be 1.58 billion mobile phone social network users worldwide in 2015, according to eMarketer. Even considering the ban in China and strong local social networks in other large-population countries like Russia, mobile Facebook users will still represent more than 60% of the worldwide mobile social audience.

The US will remain the largest market for mobile phone Facebook users this year, and nearly 80% of users in the country, or 123.1 million people, will access the site regularly via mobile phones. Mobile ads will account for 74.0% of the company’s ad revenues stateside, eMarketer forecasts, slightly higher than its share on a worldwide basis. 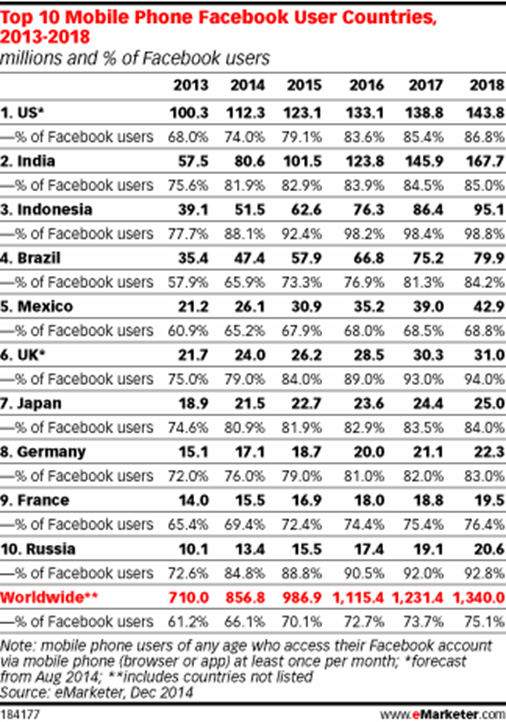 Indonesia outpaces all and stands on top

In its latest release, eMarketer revealed that Indonesia is home to the third-largest Facebook mobile phone audience, after the US and India.

According to eMarketer, 92.4% of Facebook’s audience in Indonesia accesses the social networking service through mobile phones at least once per month, putting the country on top of any other country, followed by 79.1% of Facebook users in the US and 82.9% in India.

Facebook’s monetization strategy—the shift to in-feed advertising and the migration to mobile—quite obviously puts the leading social network at the center of the native advertising ecosystem. This means the vast majority of Facebook’s nearly $7.9 billion in advertising revenues in the first nine months of 2014 came from native formats (in-feed on desktop, in-stream on mobile).

To date, little of Facebook’s native ad inventory has consisted of video assets, but that’s about to change. The company has signaled a major push toward video advertising beginning this year, and early signs are starting to appear in users’ feeds. eMarketer believes that Facebook’s native ads are poised to become a huge revenue driver for the social network—and for native video advertising in general.