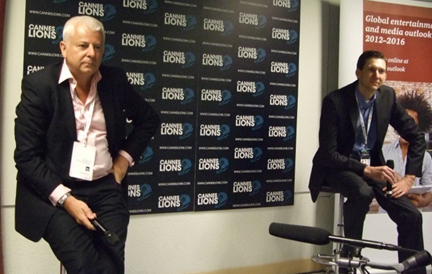 Digital migration is increasingly playing out differently across various segments and geographies of the entertainment and media industry. PwC’s global Entertainment and Media Outlook 2012-2016, which was just launched during the Cannes Lions, tries to put this into perspective.

On the sidelines of the Cannes Lions, Asian e-Marketing met up with Marcel Fenez, Global Leader, Entertainment and Media for PwC, who is based out of Hong Kong, together with Matt Hobbs, Director Technology, from PwC’s California office, as they exchange some ideas and thoughts out of the published study and their experience.

“Today there is no point in talking about “IT”! We are moving into a period of “digital normality” and have to consider marketing as being an integral part of the digital world. As a result, we see much more of a marriage between media talent and technology - through simpler ways by tagging metadata and how information is being organized”, Mr Fenez stated.

According to PwC, there is good news for the overall forecast of the industry, as they are forecasting 5.7% of compound annual growth during this period, and the rate of advertising growth even higher than that, at 6.6% compound over the next 5 years, with some ups and downs, but strong advertising growth with some increase also in consumer growth. Although 2012 is seen as a potential crisis year, according to Mr Fenez this is not to be feared. Based on past experience, even numbered years always have one up for the media and advertising industry, as these are years with big sports events like Olympics, World Cups and the like, adding additional revenue opportunities. So 2012 should not pose a problem for the industry until the market further recovers by 2013, softening an otherwise potentially difficult year.

In terms of geographical differences, it is clear, that mature markets will have a slower rate of growth and increasingly the BRICs will grow strongly, though all of them for different reasons, as these markets are quite different from each other demographically.

PwC sees digital advertising taking 29% of the total advertising market. In some markets, the share will be even higher, e.g. China with a predicted share of about 40% by 2016.

A good trend is that TV is not dead. Reallocating some of the digital dollars back into newspapers, magazines or TV is a good investment. TV is a live medium and it still is large considering the proportion of ads spend. Television is starting to embrace social media and the power of the second screen. Even though we might have up to four different screens, TV lends itself to be the first screen, interacting with the second screen, no matter which screen you choose to be the second one. This is how traditional media is learning to re-attach itself to an engaged consumer. We were talking about the end of prime time a few years ago; it has become my time, and is developing into social time.

Other trends besides the migration to digital in this five year period will be that certain segments have actually seen their tipping point, for example:

Another key development is the issue of privacy over the past 12 months in relation to big data. How do we collect and mine big data to get to the little data we need. All this is happening against the concern of the consumer. In the last 12 months we have seen increasing security leaks in terms of data. In the next twelve months the focus on regulation will be increasing, and the industry is concerned about over-regulation. The key is consumers sharing information with people they trust, and it is very easy for that trust to be destroyed in many different ways. Clearly, people get annoyed incoming messages to mobile devices about products they do not want. Things like this destroy trust.

The key is to empower the consumer and his data to where he keeps or regains this trust. In this field you often hear “who owns the consumer?” or ”do I own the consumer?”. We have to return to the point that where consumers feel as owners of their data sharing it with people they trust. The entities collecting data have to regain this trust. This will be a big issue over the next twelve months.

The complexity to getting the right data is another major effort. When asked by Asian e-Marketing, where PwC sees the first regulatory action by governments in regard of gathering and using big data, Marcel cited that most likely Germany will be first with strict rules on privacy, followed by China (more from a restriction of data perspective), with the US coming much later.

Another large challenge for the media industry, a huge one according to 35% CEOs of key media companies, is the lack of talent and the difficulty to find and access qualified staff. This keeps them from developing new and innovative ideas and prevents implementing new features and technologies.

Tech companies are competing with media companies for a small pool of talent. Fresh graduates in that field will be more likely to be attracted to tech companies then to media companies, as it matches their field of study better. So there is competition between the two. And once you get the talent, how do you use it, how do you get them to where they can do what you need? Smaller companies tend to do this better. They also tend to innovate better. There is a direct correlation between innovation and talent. Besides, small companies tend to innovate at a much higher rate than large corporations.

According to Matt Hobbs, most talent is currently being developed offshore in India and China, which is why there is a shift of where development is taking place. When questioned by Asian e-Marketing about the cliché being valid, PwC stated that talent is abundantly available in these two countries. Marcel, being from Hong Kong and having traveled the region for a long time added that by now, due to lack of availability and leapfrogging of technologies, there is a lot of new talent in countries like the Philippines, Thailand and Indonesia. Here you find tech savvy people who grew up with mobile devices and have been texting and using these devices much more than in countries with a technology legacy, inhibiting the adoption of the newest and latest technologies. These countries are becoming highly relevant in this field.