Last year, as part of a research study, Dimitri Tarasowski collected data on the deployment and use of digital analytics tools in corporations. He summarized the first results of the study in an article that was dealing with how “Google Analytics found its way into German stock index (DAX) companies”, the blue chip stock market index that consists of the 30 major German companies trading on the Frankfurt Stock Exchange.

It actually means that the analyzed DAX 30 companies trust Google’s analytics software, but some of the companies even have implemented several solutions at the same time. While most web analytics providers still don’t see any direct threat from Google Analytics Premium, it doesn’t mean that the premium version will probably bring even more market share for Google. 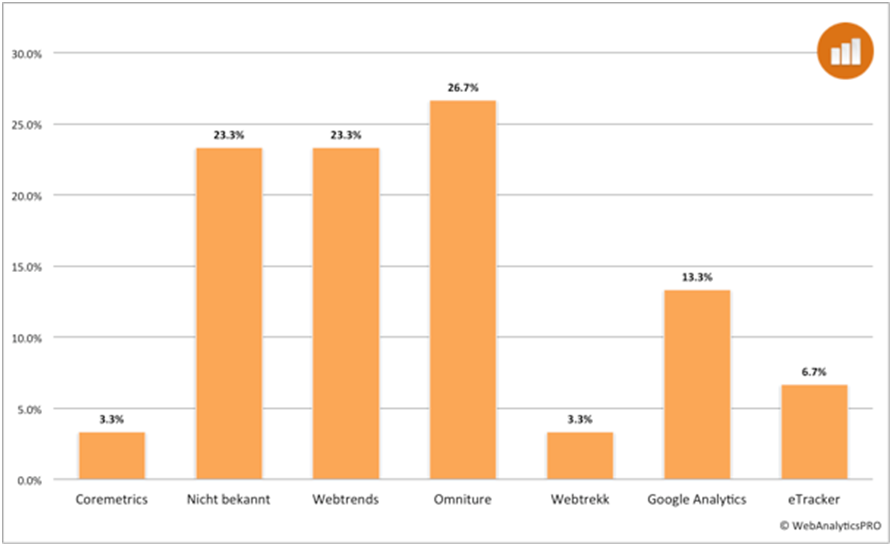 As well as in recent years, Adobe's Omniture has been the clear favorite, closely followed by Webtrends, and in spite of the privacy debate and possible other limitations, Google Analytics has found its way into larger companies now, too.

Dimitri Tarasowski’s current study shows quite clearly that the market shares have changed massively compared to 2012. In particular, the high-end tools are slowly losing ground and are replaced by partly free and easy tools.

Similar to last year, the table is headed by Adobe. Webtrends is taking the second rank and is followed only then by Google Analytics that couldn’t gain any market shares this year. In addition, the proportion of "unknown" tools (in-house, server- side etc.) decreased, and as last year, IBM Coremetrics and Webtrekk could not increase their market share in this segment either. A look at the latest figures asserts that the two rather simple and effective solutions have made a high jump.

Of course, we are only talking about the 30 top companies, but it is an interesting development, which is not necessarily positive for the whole industry. These two providers are certainly happy about the considerable increase, conversely, it means nothing else than "if you have to tighten your belt, you have to economize."

Now, it can be speculated that the budget for expensive solutions are not so easily accessible as it has been a few years back, or there are other reasons to replace advanced solutions in favor of inexpensive but robust solutions.

This development could prove to be a "failure" for the entire industry, as it seems that the additional value of analysis and optimization has still not been well-understood or brought closer to the customer. Therefore, we are already looking forward to the next collection and announcement of such data and are curious to follow the trend.