In search of balance between citizens’ freedoms and security 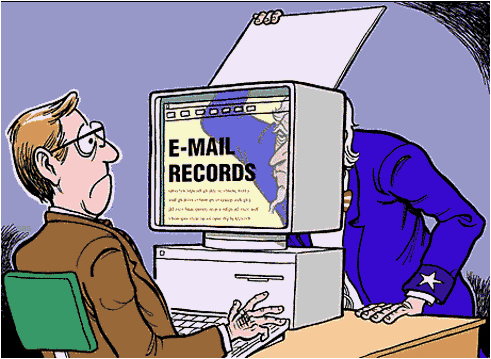 I want to take a closer look at the breaking news of this week, since they impact our topic of the month. I am talking about the fact that the National Security Agency (NSA) has been secretly collecting millions of email and instant messaging contacts from around the world.

The Washington Post, the New York Times, the Guardian, and a vast array of other publishers have all reported in part the classified files attributed to Edward Snowden that have since the first disclosure on June 5 exposed the inner-workings of America’s vast surveillance apparatus – the NSA.

Before the recent revelations the agency could work under a cloak of utmost secrecy, which has only begun to be rolled back by recent media reports, such as the Russian news channel RT.com, numerous magazines, like the German Spiegel or Wirtschaftswoche, that dealt intensively with the privacy and security dilemma.

But even Yahoo! covered the topic widely, although the company itself has been hit the hardest, as Washington Post recently reported: "During a single day last year, the NSA's Special Source Operations branch collected 444,743 email address books from Yahoo alone, besides 105,068 from Microsoft's Hotmail, 82,857 from Facebook, 33,697 from Gmail, and another 22,881 from other services. All in all it is stated that NSA managed to collect more than 250 million lists each year."

These new leaks are even kind of more outrageous than the earlier eavesdropping of phone conversations, since email address books can actually provide much more details about a person’s life, containing home and work addresses with business and family information. Email address books can reveal political and religious affiliations or other private issues, and in fact even lead to false impressions, if someone neglects to delete entries belonging to friends they are no longer associated with.

Well, according to reports, the NSA collected approximately 500,000 so-called buddy lists from live-chat services and the “in-box” displays from web-based email services. And, of course, US companies involved in that case deny that they were consulted or informed about the NSA’s policy. However, it’s obvious that Yahoo lists were intercepted more often than Microsoft, Google or Facebook, because Yahoo!’s email service automatically leaves connections between users unencrypted. At least this is expected to change in January 2014.

In fact, NSA documents prove that the intelligence agency collected so much information that its vast data facilities barely could handle the intake that had even suddenly be stopped by “emergency de-tasking” orders.

To no surprise, telecom providers, businesses and governments are increasingly compelled to move or reinforce web operations following the disclosures of the NSA’s mass internet surveillance programs made by whistle-blower Edward Snowden.

Germany’s largest telecom provider, the Deutsche Telekom, is now planning to introduce a “national routing” service which would keep German internet traffic out of the hands of foreign spies, RT.com reported, emphasizing that email data is currently exchanged between users worldwide via international Internet exchange points - physical structures through which Internet service providers (ISPs) exchange Internet traffic between their networks. It is even planned to expand the initiative to the Schengen area, the group of 26 European countries, in a next step.

Brazil is talking action as well and intends to vote on the creation of a cyber-security system to prevent NSA espionage and further US infiltrations into Brazil’s administration. But the movement did not only gain momentum large–scale, many smaller companies started to feel the need to move their servers out of the reach of the US.

The situation triggered, for instance, the Malaysian-based finance advisory firm Najadi & Partners to move the company servers into the .ru domain, since neither .com nor European Internet domains could be trusted anymore. As reported last week, Pascal Najadi, may be pioneering such a step, but foreign companies, including major international brands, have been steadily showing interest in having their sites registered in .ru domain. In an interview with RT.com, Sergey Gorbunov, deputy director for International Relations at RU-Center, affirmed that “foreign intelligence agencies of course have less opportunities to control the equipment that is placed in Russia”, adding that already up to 26% of domains registered in .ru are owned by foreign companies.

The case of Edward Snowden has captivated world media since he fled from the US in May. He got finally asylum in Moscow, which means that he can’t legally be extradited, not to mention his exodus to Hong Kong in search for protection. China slammed the US after Snowden’s eye-openers as “manipulator of Internet rights” and indeed it’s a shame that the Obama administration permitted NSA to continue collecting vast amounts of records detailing the email and Internet usage of Americans for more than two years, as documents revealed.

Unfortunately, it is not foreseeable that the current revelations will stop governments from getting their hands on information, although it might complicate efforts to do so, but the consequences are obvious.

“We already saw this before”, told Andrei Masalovich, Head of the Department for Competitive Intelligence of the DialogNauka Company, The Voice of Russia: “When terrorists attacked World Trade Center in New York in September 2001, several leading Russian IT companies were contacted by companies from Japan, Taiwan and others. Seeing that an American security model, including Internet security, failed, businessmen decided to look closely at the Russian approach to the matter”. Masalovich thinks there is a possibility that Internet users will be considering the Russian Internet more and more often as an alternative to the American and European one.

“It may seem strange but there are not many alternatives. There is a Chinese Internet model but it suits only China. There is an Arab model which is rather alien to other countries. There are also European, American and Russian models. And I think Malaysians felt right that there were more chances to avoid being subjected to US secret services in Russia than in Malaysia,” Masalovich concluded.

He pointed out further that if we talk about a wide range of users, stunned by the availability of confidential information, we need to remember that more than a million users deleted Facebook accounts after Snowden’s leaks. In fact, it can’t be said for sure how many domain name owners would like to move to the Russian Internet, but Internet refugees’ influx from domain zone .com is likely to increase.