How to Engineer User Behaviour with the Desire Engine

In his welcome speech at the Gamification Summit 2012 in San Fransisco, Gabe Zichermann, CEO of GamificationCo. said to his audience: „for most of us the concept that work and play need not be diametrically opposed, seems absolutely, positively natural. But for the vast majority of the people in the world, that is just not true. What percentage of the people in the world would describe their job as fun and engaging and full of epic meaning? Half of the gamification industry today is devoted to the enterprise and making work a better place and software companies are starting to care that end users/employees like the software they are making. Things are changing, and we will be at the forefront of making that change happen.“

Obviously, the potential in the gamification sector is incredible and in his speech at the Gsummit, Nir Eyal offered some very interesting insights into how to design and engineer user behavior. On his web site nirandfar.com, he suggests: "Type the name of almost any successful consumer web company into your search bar and add the word “addict” after it. Try Facebook addict” or “Zynga addict” or even “Pinterest addict” and you’ll soon get a slew of results from hooked users and observers deriding the narcotic-like properties of these web sites. How is it that these companies, producing little more than bits of code displayed on a screen, can seemingly control users’ minds? Why are these sites so addictive and what does their power mean for the future of the web?“

Nir studied the behavior design patterns in these companies and how behavior is engineered, identifying two types of companies that either sell vitamins or painkillers. Investors prefer painkillers, since there is an obvious need, they stop pain and there is a quantifiable market. Vitamins are about emotional needs, it makes people feel better if they are taking a vitamin, investors generally don‘t like to invest in these businesses.

Well, a habit is something, that when not doing it causes pain, e.g. if you know there‘s an e-mail waiting for you and you can‘t check it, that causes some kind of tension and pain. So companies that successfully use habit forming technology move us from pleasure seeking behaviors to selling pain alleviation. They create the need and they sell the remedy. Ian Bogost, a video game designer, critic, researcher and professor at the Georgia Institute of Technology, calls this “the cigarette of this century‘.

In Nir‘s opinion this technology and the ability to create habits though technology is simply the tip of the iceberg. It‘s time to change the world by changing behavior and came up with the desire engine. 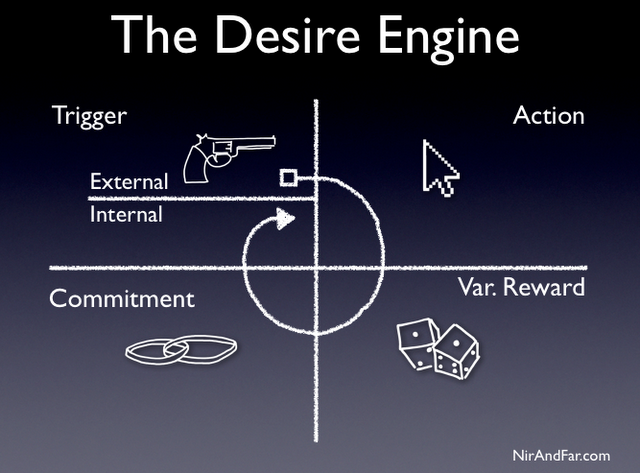 How do you engineer an automatic response to a stimulus?

The desire engine moves users within the flow of the product experience, from external to internal triggers.

Action is when doing is easier than thinking or how B.J. Fogg describes it: „behavior = motivation + ability + trigger“, but how does this map onto your organization?

ability = product (ease of use)

Variable rewards drive people nuts and cause compulsive behavior driven by the dopamine system, since we seek to bring order to where there is chaos. We want to understand how systems work, and if we can‘t figure it out, it drives us nuts.

Dopamine is about the search for rewards: 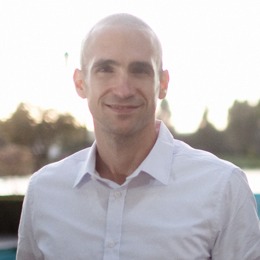 Commitment means here that users do a bit of „work“, they „pay“ with time, money, social capital, effort, data etc. This comes after the reward and is about future rewards. Is it a good decision? Should I spend time, money etc.? There‘s a crazy logic behind this process: e.g.: only an idiot, would spend on something not good and since I spent on it before, and I‘m not an idiot, it must be good. Consistency is a cognitive hack and commitments make the next action more likely.

How to use a “desire engine”?

According to Nir Eyal we’re on the precipice of a new era of the web. As infinite distractions compete for our attention, companies are learning to master new tactics to stay relevant in users’ minds and lives. Today, just amassing millions of users is no longer good enough. Companies increasingly find that their economic value is a function of the strength of the habits they create. But as some companies are just waking up to this new reality, others are already cashing in.