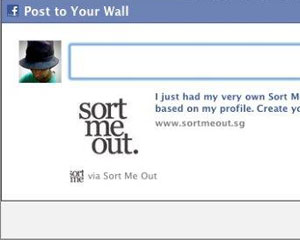 The Singapore branch of Grey, the global advertising network of Grey Group that belongs to WPP, launched in January 2012 a Facebook application that allows netizens a first-hand experience of the effects of Alzheimer, a brain illness that erodes mental abilities.

Working in partnership with Alzheimer's Disease Association (ADA) Singapore, the agency developed an innovative app called, "Sort Me Out", that simulates an Alzheimer's person's loss of memory to help increase public awareness about the disease.

The app was designed to get into 'the head' of a person with Alzheimer's disease to highlight the gradual memory loss they suffer. It is activated when a Facebook user logs in to accept the app. It then launches and gives the appearance of initializing the sorting out process of the user's content. The user then witnesses his/her Facebook content being slowly 'erased'; starting with the wall posts, followed by friends list, personal profile and lastly, photographs. On the social media platform however, that process was fast forwarded to create a sense of helplessness and anxiety amongst netizens to help drive awareness of the effects of the illness.

As people with Alzheimer's exhibit challenging behaviors; caring for them can be exhausting both physically and emotionally. People with dementia need to be treated with as much dignity and independence as possible and their caregivers, who usually are immediate family members, need support from their network of family and friends. The goal of the campaign was to give people a first-hand experience of the disease to understand its nature by demonstrating real-time, the identity and memory loss felt by people with dementia. 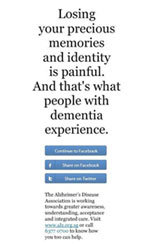 "Grey's novel digital campaign, harnessing the power of social media to create greater dementia awareness and acceptance amongst the public, was the right direction we were looking for. We hope this would ultimately lead to early intervention for diagnosis and integrated care in Singapore", said Theresa Lee, Executive Director of ADA.

"The app is a creative way to highlight the seriousness of Alzheimer's", said Ali Shabaz, Chief Creative Officer, Grey Group Singapore, Indonesia and Thailand. "Currently there are more than 2.6 million Facebook users in Singapore and for many it is a carefully cultivated online depository of self-identity and memoirs. Losing it would be devastating; likewise memory loss for people with Alzheimer's is a life crippling situation. Facebook was therefore the ideal platform to launch such a campaign and digital was used in a way like never before to create awareness of the illness", he added.

The campaign developed by Grey Singapore and Yolk, a Grey Group company, was launched in December last 2011 on Facebook and Twitter.