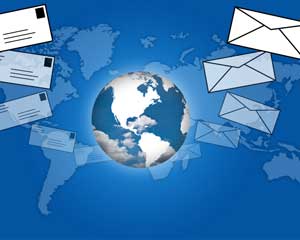 MIME is an internet standard for attaching non-text files to an internet mail message, such as animation, graphics, hypertext files, sound files, and spreadsheets.

MIME standard converts (encodes) non-text files into text that is normally unreadable and then, at the other end, reconverts (decodes) the files to their original form.

The basic internet email transmission protocol, Simple Mail Transfer Protocol (SMTP), supports only 7-bit ASCII (American Standard Code for Information Interchange) characters, which effectively limits internet email to messages which, when transmitted, include only the characters sufficient for writing a small number of languages, primarily English. Other languages based on the Latin alphabet typically include diacritics and are not supported in 7-bit ASCII, meaning text in these languages cannot be correctly represented in basic emails. MIME, therefore, defines mechanisms for sending other kinds of information in email. These include text in languages other than English using character encodings other than ASCII, and 8-bit binary content such as files containing images, sounds, movies, and computer programs.

Internet email is so closely associated with the SMTP and MIME standards that it is sometimes called SMTP/MIME email.

The content types defined by MIME standards are also of importance outside of email, such as in communication protocols like HTTP for the World Wide Web. HTTP requires that data be transmitted in the context of email-like messages, although the data most often is not actually email.

Mapping messages into and out of MIME format is typically done automatically by an email client or by mail servers when sending or receiving internet (SMTP/MIME) email.

These standards specify the familiar formats for text email headers and body and rules, pertaining to commonly used header fields such as "To:", "Subject:", "From:", and "Date:".

MIME is extensible. Its definition includes a method to register new content types and other MIME attribute values.