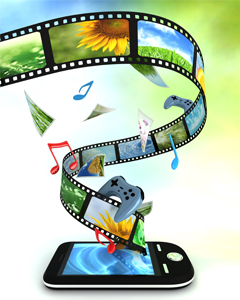 Asian e-Marketing interviewed Mr. Sandeep Casi, Founder and CEO of Cinemacraft, in June, during BroadcastAsia, who envisions transforming any mobile device into a television.

In fact, his company’s patented compression and format server technologies (Prime Streaming Format), combined with its HTML compliant player, provides a single solution that can be used to stream to any mobile device on any network. Through this, consumers can experience both live and on-demand video with superior clarity and quality on mobile devices.

As the demand for mobile TV and IPTV grows the chance of success is enormous, especially since mobile consumers are demanding video intensive applications from the marketplace and telcos and content publishers meanwhile are facing issues in supporting bandwidth intensive content in a wide variety of formats (e.g., Real Video, QuickTime, and Windows Media Player) on diverse handsets.

Who is the man behind the business venture and innovations?

Sandeep, originally from India, left when he was 17 for education in the US. Somehow, at the age of 20, he started his career at General Motors (GM) in Detroit as a Systems Engineer and became part of a pioneering team that developed Virtual Reality technologies for automotive design and automotive crash analysis. It was at GM where he started to focus on what was later called “motion capture”. “Interestingly, I had never envisioned that motion capture would end up being used in Hollywood and out of the blue I got a call from George Lucas”, he said, and he started to work for Industrial Light & Magic soon after.

“This was in 1993 and the Web was not so advanced at that point in time, Yahoo! was just beginning to surface, there was AltaVista or Excite, and you couldn't find much information. George Lucas’ company didn't even have a website then, but was basically innovating the next media generation. For me it was simply a no-brainer to quit GM and join them as a motion capture programmer”, he said. Then he became chief architect for Sekani (acquired by Corbis Images), before joining the Xerox Palo Alto Research Center in Silicon Valley as a Research Scientist.

Sandeep holds two patents in the area of digital media, five research awards from the Xerox Palo Alto Research Center, and an award for innovation from General Motors. He is also the co-founder of TiE Japan and an angel investor focused on media technologies.

“By the time I left George Lucas, I had become the head of systems programming, which was just after Star Wars Episode I. I had experienced the corporate life and the motion picture side, but wanted to do broadcasting. So, I was searching and found a consulting job with BBC and CNN, trying to understand how broadcasting works. After that I came back and joined Xerox Palo Alto Research Center in Silicon Valley as a Research Scientist, where I earned patents in mobile media. One of the patents was very interesting for the Japan market, as it was the only market back in 2003 that had an advanced mobile industry. So I got shipped to Japan and worked there with Fuji Film and Fuji Xerox till 2007, but figured it was time for me to step out and do something on my own, after 17 years in the corporate life”, Sandeep told me.

After all his years in Asia, Sandeep decided to stay full-time in Tokyo and joined a boutique venture capital firm. “I did that intentionally so that I could understand how businesses work in Asia”, he said, as in this way he would basically be using somebody else’s dime to figure out what he wanted to do and to figure out how the whole system in Asia works. “I was doing targeted insertions into India, went into China, talked to entrepreneurs and business leaders to learn and understand these markets”, Sandeep explained.

Then in 2010, when the mobile explosion really started to reach the mass, he decided that it would be the right time to step up and do something on his own. By that time he had already invested in a few companies and one of these companies was Cinemacraft.

So Cinemacraft is a product that has been around for 11 years by a company called Custom Technologies, a leader in Blu-ray and DVD encoding. Actually, anytime you watch a DVD the encoding is done by a Cinemacraft product. All studios, all post-production studios, movie studios around the world use them today. Sandeep’s idea was to extend that product to mobile devices, noting “What we have done is to disrupt the business model that we have today, which is the box model, by bringing the product to market and starting the services side”.

His company made this move very silently taking a step by step approach launching its service first in Japan and then in India and Indonesia this fall. Two of Cinemacraft’s investors are major Bollywood studio founders, which guarantees the company will have Bollywood movies and Japanese anime as well as manga in their product market, which means that Cinemacraft need not have to go anywhere else as they could just monetize these alone and be very busy and successful for a long time.

How does the technology work?

Sandeep explained that most of the technology exhibited at BroadcastAsia2011 uses what is called discrete co-efficient transformation, which means a television, which is broken down into 4 x 4 pixels, gets encoded and then decoded by big set top boxes. Mobile devices, however, don’t really have that much processing power, so thanks to Cinemacraft’s patents, the company is not only able to deliver to feature points but also to smart cards.

“What we have done is to come up with our own interesting algorithm called Feature Extraction Compression that takes into consideration that usually a lot isn’t moving, so that we take one frame and whatever is not moving is kept in the frame from the past, while only the difference of the pixels will be taken”, Sandeep described their fantastic solution for a mobile device. By sending only the difference, a video at 30 kilobytes per second can be developed, which is right now not possible with the current technologies such as Microsoft’s Media Player, Apple’s Quick Time or others. “Looking at SingTel here or even AT&T in the US, we realized that they all promise a 3G network but are barely providing 2.5G, so even in advanced markets our compression can actually benefit the consumer”, Sandeep commented.

The second technology Cinemacraft uses is called adaptive streaming, which is a process that adjusts the quality of a video based on changing network conditions to ensure the best possible viewer experience. Internet connection speeds vary widely, and the speed of each type of connection also varies depending on a wide variety of conditions, so you can imagine that streaming to a mobile device is not as easy as streaming to a connected device. To guarantee a good experience when watching movies on mobile phones, Cinemacraft started to reduce the image while keeping the streaming of audio constant, which only needs 8 Kb. “If you are watching sports, you will forgive if the video once in a while goes down, but the audio stays constant. However, if the audio and the video collapses as well, that’s when the consumer gets really, really angry,” Sandeep states, adding that these are two technologies they deploying and that he isn't willing to disclose more at the moment.

His company is looking at different ways of media consumption, taking into consideration his statement that he doesn't think devices like these are made for passive watching and should be used like a television but interacting with the media. “We have certain patterns and certain things that we are trying to do which are very lucrative for us in three to four months time”, he predicted.

Indeed, we shouldn't lose track of the fact that Cinemacraft is not just a technology company but a media company as well: it’s a merger of technology and liberal arts in many ways and a kind of cross section of both. It’s in the DNA of the company and that’s how Sandeep sees it, saying: “My DNA is that working at Lucasfilms never makes you an engineer, but actually a storyteller. So, I am in fact mixing story telling with technology and that gives us a unique leg up in the market. We want to do streaming where we think the technology is just a commodity. If tomorrow something better might come along, I would be the first one to license it.”

So far, his company’s patent pending encoding/decoding and streaming technology combined with their Media Cloud (Content Management, Rights Management, Stream Management, and Interactive Media Management) still offers unequalled opportunities. It provides an end to end interactive media broadcast cloud for content publishers, game publishers, and enterprises to monetize their media assets and I guess we will hear more in the future from this innovative company and its driven leader.