We support “A Day Without News” campaign: justice for death of journalists in war zones 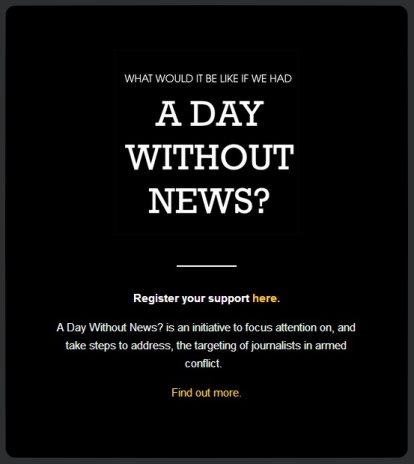 A group from within the media and photojournalism industries have joined forces to raise awareness of the risks in their profession and to lobby governments and tribunals to pursue and prosecute those who harm members of the news media.

The campaign A Day Without News?, which already has wide support across the international news media community and is launching today, intends to:

• draw sharper attention to the growing numbers of journalists who have been killed and injured in armed conflict - in some cases as a result of direct targeting by the belligerents;

• develop a public diplomacy, institutional and legal agenda to combat this more effectively;

• investigate and collect evidence in support of prosecutable cases in this area.

On February 22, 2012, legendary correspondent Marie Colvin and photojournalist Remi Ochlik were killed in Homs, Syria. Evidence from eye witnesses, including London Sunday Times photographer Paul Conroy who was working with Marie, said that they had been deliberately targeted.

Marie was reporting the previous evening live on CNN on an attack that targeted civilians and the death of a young child respectively. She discussed with Anderson Cooper why it was important to show the graphic images of the dead boy, which is believed to have angered the Syrian regime and brought about her own death.

Many correspondents, photographers and other media professionals find themselves deliberately targeted by forces when attempting to cover conflicts around the world, and while it is considered a war crime to do so, there has been little to no enforcement of this international human rights law when it comes to journalists.

Over the past decade, 945 photojournalists and correspondents have been killed while covering conflict zones - 583 of these without any resulting prosecutions as war crimes. Furthermore, 90 journalists were killed while reporting from war zones in 2012 alone, including the high profile cases of Marie Colvin and Rémi Ochlik in Syria, as well as Chris Hondros and Tim Hetherington in Misrata, Libya in 2011.

Emilie Blachere, Rémi Ochlik’s girlfriend, remarked: “It’s really important to show the world not as we imagine it but the world as it is: beautiful, amazing but so, so vicious. And photographers and journalists do this every day, every hour. Some of them die for this. We have to make the general public sensitive to the importance of the press. One year ago, on February 22nd, Rémi Ochlik died in Syria doing his job, and because he was doing his job, he was targeted, and still, nobody has been accused or arrested. The murder of journalists and photographers carries on with impunity.

Rémi Ochlik’s family and I are really touched by the A Day Without News? campaign, we support this project because we want reporters to go everywhere, and especially we need them to come back safe and sound to continue their work.”

Led by Aidan Sullivan, Vice President, Photo Assignments, Editorial Partnerships and Development for Getty Images and founder of the campaign A Day Without News?, marks the one year anniversary of the deaths of legendary correspondent Marie Colvin and photojournalist Rémi Ochlik in Syria on February 22, 2012 with the initiative. The website invites people to add their names to the growing list of supporters and MediaBUZZ wants to do its bit by helping to spread the campaign.

Aidan Sullivan comments: “It is unacceptable that those looking to report objectively from conflict zones around the world are deliberately singled out, targeted and murdered with impunity, with those responsible for their deaths not facing any repercussions. Without these journalists bearing witness, atrocities committed in war would go unremarked and it is an equal cruelty that their deaths go without justice. This is a situation, which has to change. We are heading towards a day when it will be too dangerous for journalists to enter into or report from war zones.”

By urging people to share the link to www.adaywithoutnews.com through social media, as well as showing support for the cause by adding their name to the list of supporters, it is hoped that the initiative will raise awareness of the vital role correspondents and photojournalists play and the risks they face when reporting from war zones. The group also aims to develop institutional and legal agendas to stop journalists from being targeted, and to investigate and collect evidence to support prosecutions to seek justice for these deaths. The ultimate goal, however, is to generate grassroots support within the community that will further the work of the Committee to Protect Journalists, Reporters Without Borders, Human Rights Watch, and other invaluable organizations who are dedicated to this issue.

A Day Without News? is working closely with these organizations to ensure that this campaign serves their missions – hopefully by building public support through publicity, increasing pressure for change through diplomacy, and facilitating the identification, investigation and prosecution of war crimes committed against journalists.

Help raise awareness of the A Day Without News? initiative by tweeting one of the following: