Will malware and wallet theft slow-down the Bitcoin drive?

Bitcoins are around now for five years, just recently having gained mass media attention –  not for the right reasons –- but for criminal activities and theft. If the launch of the world’s first Bitcoin ATM has been astonishing a few months back, attacks from unknown hackers started to spread fear and trepidation now.

Allegedly, two Bitcoin exchanges already face problems that caused them to temporarily halt withdrawals by customers who stored Bitcoins in digital wallets provided by the exchange. But as the Bitcoin Foundation emphasized, cause for alarm are currently mainly denial-of-service (DoS) attacks that do not steal people's Bitcoin wallets or funds per se, but enabling perpetrators to succeed in preventing transactions from confirming. Nevertheless, Bitcoins could gain a wider acceptance in the next months, although prices noticeably vary from one exchange to another and have gone down due to the recent incidents.

Considered as online cash, the virtual currency uses peer-to-peer (P2P) networks to track and verify transactions. Take a look at the infographic that explains the development. 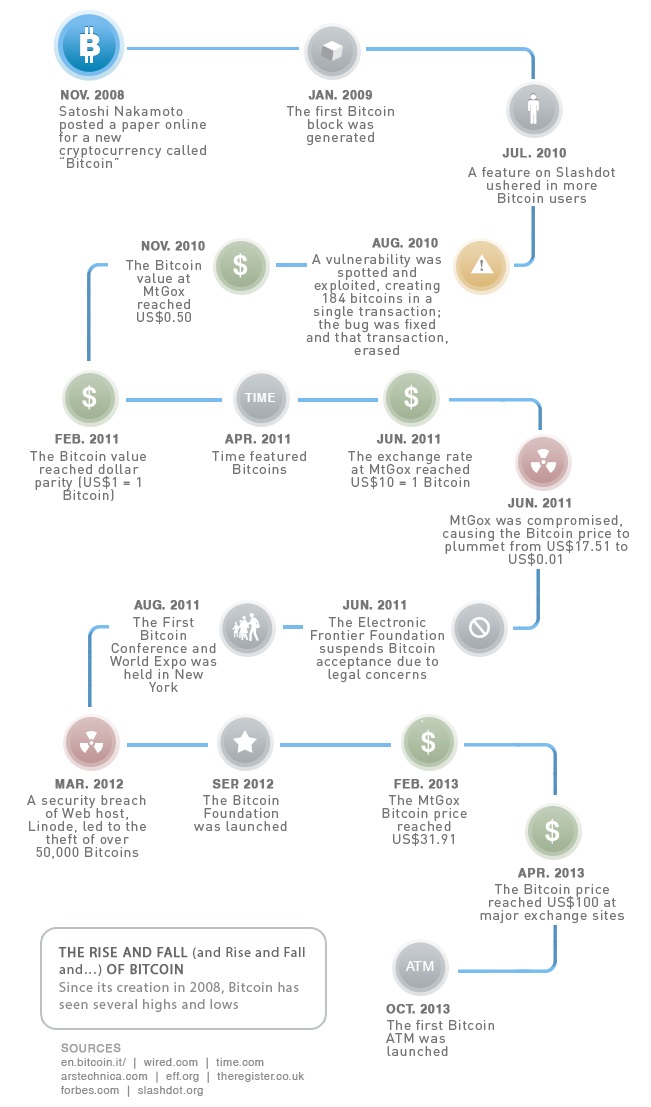 Bitcoins are generated or “mined” after processing a so-called “block” of data, a cryptographic problem or puzzle a user’s computer solves that generally requires a lot of computing power. However, users who may not have the necessary resource can simply purchase or sell Bitcoins from Bitcoin exchange sites, over-the-counter exchange establishments, or engage in in-person trading.

The entire Bitcoin network relies on a shared public ledger called the “block chain” that contains every Bitcoin or similar digital currency transaction ever processed. The validity of transactions made is verified here via the digital signatures of users’ Bitcoin address, which is required for each Bitcoin transaction besides having a Bitcoin wallet. Users can have as many addresses as they like and use them to send and receive Bitcoins. To help manage their transactions, Bitcoin users rely on the Bitcoin wallet that holds a piece of data called a “private key,” used as proof that the transactions come from the wallet’s owner. This key or signature prevents any transaction from being altered.

But whoever believes that’s a bulletproofed concept is wrong as there will be always fraudsters at work when it comes to money. And the fact that Bitcoins slowly has become a legitimate currency obviously spurs the interest of cybercriminals, especially since Bitcoin-mining malware can make them easy money. Besides, Bitcoin-related threats are not limited to malware only. Trend Micro, for instance, identified a phishing page imitating the popular Bitcoin exchange site MtGox to detour the virtual money into their pockets. Smart Protection Network revealed, for instance, that globally more than 12,000 PCs had been affected by Bitcoin-mining malware in the 4th quarter of 2013 alone, which is quite a number.

Therefore, securing and protecting your Bitcoin wallet, if you have one, should have top priority and here are some tips:

It’s important to recognize that there are two factors that make defending against Bitcoin theft particularly important. First of all, all Bitcoin transactions are permanent as there is no “undo” button. If a thief is able to take control of your Bitcoin wallet and transfers all your funds, you have no technical recourse. Besides that, there is no authority in the world for Bitcoin you can appeal to in case of fraud to reverse the charges. Thus, consider the real-world wallet scenario and don’t carry around all Bitcoins all the time, but securely store them somewhere. To cut a long story short: Simply handle Bitcoins the same way as cash.

With its public acceptance and rising value, malware related to Bitcoin mining will inevitably increase and concurrently raise more security issues. So stay safe by considering my advice.