The whitepaper "Power of Like 2: How Social Media Marketing works" is a research collaboration between comScore and Facebook which delivers unique insights on the impact of social media marketing.

The research, which primarily leverages data and analysis from comScore and Facebook’s internal analytics platform, focuses on the impact of branded, earned and paid media exposure on the behavior of Facebook Fans and Friends of Fans. The most interesting part of the research is the three intermediary steps to really get results, which apparently most brands don‘t consider.

For brands to resonate on Facebook, the first step is literally to be seen. While brands have the opportunity to communicate directly with their Fans through the News Feed, not every brand message delivered results in an exposure to a Fan. Facebook uses an algorithm to help optimize the messages users see in their News Feed, and while the exact algorithm is not public information, it is clear that relevance plays a role in message visibility. So brands in which consumers engage more regularly, whether through a comment, share, like, or check-in, have a greater likelihood of being seen on the News Feed, otherwise known as Fan Reach or “cut-through”. In addition to optimizing with a focus on delivering relevant earned messages to Fans, brands can also extend their reach on Facebook using Facebook’s ad platform. For example, a Page Post can be promoted to ensure it reaches a far larger percentage of a brand’s fan base than would be reached organically. 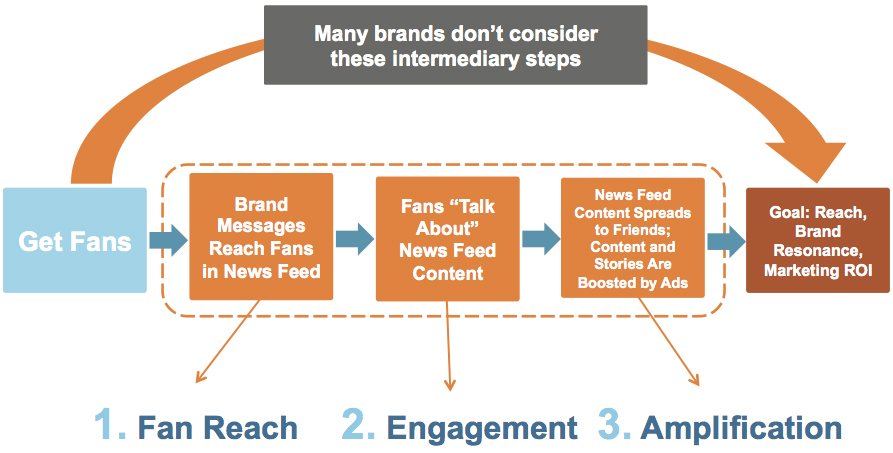 Engagement with brand messages – such as a like, share, post, check-in, etc. – has recently become a hot topic of discussion in the social marketing arena. A recent study demonstrates that only a small percentage (typically just around 1 percent of Fans) actually engage with a given brand message. The research concluded that due to the low engagement rate, brands should perhaps not look to Facebook as a primary marketing channel.

However, this research conclusion overlooks a few critical aspects of why even apparently low engagement rates may be more valuable than one might think. Consider, for the sake of comparison, display ad engagement (i.e. click-through) rates. According to DoubleClick, click-through rates on display ads most recently stand at approximately 0.1 percent. When examined through that lens, a social marketing engagement rate of 1 percent is greater by a factor of 10.

If any value at all is placed on the display ad click-through, then perhaps more credit should be given to a social engagement rate of 1 percent. But this argument still ignores the full effect of social engagement, which is that such actions – however low in incidence – provide a means of significantly expanding the reach of a particular message throughout the user’s network. This phenomenon is referred to as amplification.

• Amplification: Expanding Reach by promoting Content to Friends of Fans

Amplification is perhaps the most important, and least understood, element of achieving brand reach and resonance on Facebook. The idea behind amplification is that Fans who are reached with brand messages can also serve as a conduit for brand exposure to Friends within their respective social networks. Because the average Facebook Fan has hundreds of Friends, each person has the ability to potentially reach dozens of Friends with earned impressions through their engagement with brand messages.

Due to factors like Fan Reach, the average brand message from the Top 1,000 brands on Facebook is able to deliver an actual amplification of 81x if their efforts are maximized. In practice, while organic virality at times falls short of this ideal scenario, brands are often able to double the reach of their Page Posts through Friends of Fans. To help brands maximize the effect engagement can have on reach Facebook offers Sponsored Stories, a means for promoting brand engagement to users’ Friends.

Further Key Findings of the Research were: