Half the world will be online by 2017, UN Broadband Commission revealed 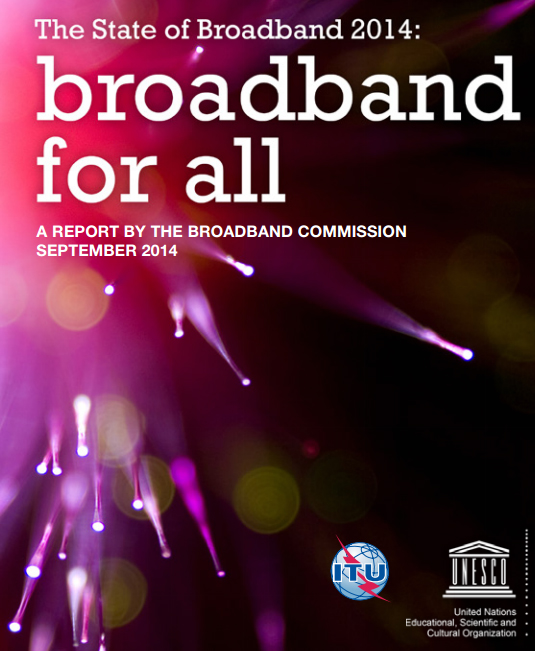 Over 50% of the global population will have Internet access within three years' time, with mobile broadband over smartphones and tablets now being the fastest growing technology in human history, according to the 2014 edition of the State of Broadband report.

Released this week at the 10th meeting of the Broadband Commission for Digital Development, the report reveals that more than 40% of the world's people are already online, with the number of Internet users rising from 2.3 billion in 2013 to 2.9 billion by the end of this year.

Over 2.3 billion people will access mobile broadband by the end of 2014, climbing steeply to a predicted 7.6 billion within the next five years. There are now over three times as many mobile broadband connections as there are conventional fixed broadband subscriptions. The popularity of broadband-enabled social media applications continues to soar, with 1.9 billion people now active on social networks.

The US ranks 19th globally in terms of number of people online, ahead of other OECD countries like Germany (20th) and Australia (21st), but behind the United Kingdom (12th), Japan (15th) and Canada (16th). The US has slid from 20th to 24th place for fixed broadband subscriptions per capita, just behind Japan but ahead of Macao (China) and Estonia.

Other nations, such as Jordan (87th), Tunisia (90th) and Iraq (157th) still have a significant way to go, with less than 50% of the population online.

Drivers of the movement

"As we look towards the post-2015 UN Sustainable Development Goals, it is imperative that we not forget those who are being left behind," said ITU Secretary-General Dr Hamadoun I. Toure, who serves as co-Vice Chair of the Commission with UNESCO Director-General Irina Bokova. "Broadband uptake is accelerating, but it is unacceptable that 90% of people in the world's 48 Least Developed Countries remain totally unconnected. With broadband Internet now universally recognized as a vital tool for social and economic development, we need to make connectivity a key development priority, particularly in the world's poorest nations. Connectivity is not a luxury for the rich – rather, it is the most powerful tool mankind has ever had at its disposal to bridge development gaps in areas like health, education, environmental management and gender empowerment."

"Despite the phenomenal growth of the Internet, despite its many benefits, there are still too many people who remain unconnected in the world's developing countries," said UNESCO Director-General Irina Bokova. "Providing Internet connectivity to everyone, everywhere, will take determined policy leadership and investment. As we focus on infrastructure and access, we must also promote the right skills and diversity of content, to allow women and men to participate in building and participating in knowledge societies. As the new State of Broadband report shows, ICTs are making a significant contribution to social development, economic development and environmental protection, the three pillars that will underpin the post-2015 international development agenda and move us towards a more sustainable world."

H.E. Sheikh Abdullah Bin Mohammed Bin Saud Al-Thani, Chairman of Ooredoo Group and a Commissioner to the UN Broadband Commission said: "This report demonstrates the essential role that Broadband technology plays in promoting human growth – and the work that is still left to do in terms of connecting under-served communities around the world. At Ooredoo, we believe that broadband access is a fundamental right for every citizen – and we are working hard to connect people across our footprint in the MENA region and Southeast Asia."

The State of Broadband 2014 is the third edition of the Commission's annual report and the only report that features country-by-country rankings based on access and affordability for over 160 economies worldwide. A full copy of the report can be downloaded.