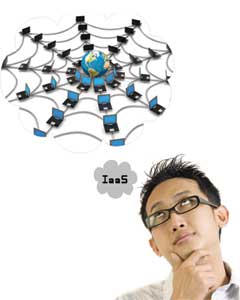 Growing awareness of the benefits of leveraging infrastructure from the cloud has led to increasing traction in the Asia Pacific IaaS market. The roll out of next-generation networks across the region is expected to improve network infrastructure in favor of IaaS, as new analysis from Frost & Sullivan affirms. The research company revealed that the market earned revenues of over US$88.9 million in 2010 and estimates that it will reach US$1,409.9 million in 2017.

“The ability to instantaneously provision infrastructure and scale it in an on-demand manner is a highly attractive model for enterprises in the region," says Frost & Sullivan Research Analyst Mayank Kapoor. “The value proposition is even more compelling considering the operational expenditures (OpEx) nature of the services, eliminating the need for capital expenditure (CapEx) required for setting up and/or ramping up dedicated infrastructure.”

Most enterprises in the region are testing these services to gain a better understanding of the delivery model, made possible due to the low cost and opportunities to try out these services without long-term contracts. The delivery model is especially beneficial for small and medium businesses (SMBs) as it provides them access to infrastructure that would have earlier been unaffordable. This has expanded the market for IaaS and is expected to be another important growth driver.

Widespread adoption of cloud-based infrastructure in the region, however, is still a few years away. Concerns around security, privacy, and sovereignty of data are the prime challenges for the market. Further, the choice of adopting a public or a private cloud is not easy for enterprises, given the perceived security and cost saving trade-offs.

Enterprises are hesitant to give complete control of their infrastructure and data to a third-party service provider. Their concerns range from the inability to track data in the cloud to access rights for data in a multi-tenant environment. Non availability of services in the event of a system’s failure or outage at the service providers’ end or in the network is another concern. Furthermore, latency and internet access reliability issues are making enterprises cautious while adopting IaaS. These factors are limiting usage to trial, testing, development, and meeting spikes in demand.

Service providers are trying to assuage these concerns by conducting third-party audits, adopting best practice frameworks such as Statement on Auditing Standards (SAS) 70 and International Organization for Standardization (ISO 27001), besides ramping up awareness of the security measures in place. Educating enterprises remains a critical piece of the service provider strategy to mitigate end-user concerns and periodic third-party assessments. This is expected to help instill enterprise confidence in security features, thus, setting up local datacenter presence is a certain way to overcome enterprise concerns.

“The upsurge in demand from enterprises in Asia Pacific has already led global players such as Amazon, Microsoft, Rackspace, and Verizon to establish local presence,” says Kapoor. “Furthermore, local presence gives more confidence to enterprises that their data will stay geographically closer and curb latency issues”, he added.

It is also essential for service providers to evolve service level agreements (SLAs) beyond availability in line with client requirements. They are likely to include disaster recovery/business continuity plan, incident handling, and guarantees instead of credits to further drive enterprise confidence.