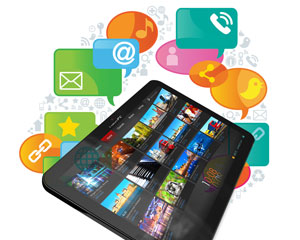 We all have a mobile device these days - whether it's a smartphone like the iPhone or a touchscreen tablet like the iPad - and most of us in the industry will use many different features of our mobile devices for various purposes.

We can now access the Mobile Web which is the key reason why you should consider launching a product in this space. What was predicted just a few years ago as the trend of the future has now become a booming market. Indeed, the explosive growth of mobile devices seems to be unstoppable as a communication channel, sparked by ongoing technological development, lower telecommunications tariffs, and the enormous demand from the consumer side.

There are now globally around six billion mobile subscribers – mainly spearheaded by China and India that account for over 30% of the growth. Fueled by the Asian markets the data released by market analyst firm Canalsys makes sense, revealing that total smartphone sales overtook PC sales around the world for the first time in 2011. Nearly 487.7 million smartphones were shipped in 2011, compared to 414.6 million PCs. (see table below)

The rise of the smartphone was simply exorbitant last year, growing by 63% in 2011, with Nokia and Samsung shipping record numbers and Apple reporting even an incredible 93.1 million iPhones worldwide in 2011, which meant a growth of 96% over 2010.

What this means for advertisers, we all know, is namely the opening of entire new worlds in terms of marketing and customer loyalty. No other communications channel brings brands, products and services to the disposal of the mobile phone. So how can companies best exploit the potential of this market? Is a mobile app that is downloaded directly onto the mobile phone of the user the best method of choice? Or does a mobile website (portal) promise to lead to a resounding success in the long run?

It's just a question of the right strategy

Mr. Han-Shen Yuan, Director Platform Business Solutions and Mobile Engineering for eBay Inc. already pointed out that it is possible to actively divert millions of users from mobile websites to iPhone, Android and BlackBerry apps. Despite his company's activity of proactively diverting traffic, mobile web revenue growth is generally increasing at the same pace as mobile app business. Therefore, it is important to have a mobile strategy that includes both mobile sites and apps, he suggests.

Indeed having a mobile strategy in place is essential, whether to decide on having an "app or portal", or both. International conglomerates or national brands have to make up their minds and ask themselves: What does the target audience want and how is it made up from a socio-demographical aspect? Is the focus more on brand management or sales? How can mobile be integrated into the existing marketing strategy? Answers to these questions are a precondition for mobile services that are relevant to the company and its customers.

Basically, companies that have a very diverse and broad audience should opt for a mobile portal since it offers the advantage that all mobile devices can be operated with a single service and is wide reaching.

Apps, in contrast, have to be designed and developed individually for each mobile operating system platform - iPhone, Android, BlackBerry, et cetera - but they offer interesting possibilities for brand promotion and sales and are, in particular, suitable for creative campaigns and the implementation of sophisticated sales services with a high ROI.

In many cases, however, it may be the best solution to employ both measures in parallel. More and more companies are following the strategy of a mobile website for general information, accompanied by apps for new products, promotions or similar activities.

A good example is Audi: via their mobile portal m.audi.de the existing website has been made available in the first step for use via mobile phones. For the launch of the new Audi A1, for instance, a special iPhone app was developed, tailored to the needs of young, urban audiences, allowing customers to check via a style consultant what A1-style suits them best, or even to design their individual A1 in 360° view. For the new top model, the Audi A7 Sportback, however, an exclusive iPad app was drawn up that allows the user to experience first-hand everything from the development of the first line sketches to the completion of the car.

Creating Web apps and sites for the mobile Web has its own sets of challenges and techniques, such as optimizing it for touchscreen devices or bandwidth limitations that most portable personal devices have, but let's take a quick look at apps pros and cons.

Aspects in favor of apps: In terms of design, there are fewer limits than with mobile portals, in addition to the fact of having much better usability. In addition, there is a greater freedom regarding the integration of mobile-related added values, such as GPS and motion sensors. For users who access a mobile service on a regular basis, it is usually more convenient and sometimes even faster via the mobile. Moreover, studies show that users of apps order products more often than users of the mobile internet.

The big downside: There are more and more technical platforms around that make it obvious that for many companies an iPhone app often isn't enough to meet their appropriate target group. Lufthansa has solved this problem, for instance, in quite a sophisticated manner. Depending on the number of hits evaluated on the mobile portal they can identify which devices were used most frequently. Consequently, on the basis of these results, in addition to their version for the iPhone, one app for Blackberry, Android and J2ME is put into practice.

In direct comparison with the app, mobile portals can be implemented faster and cheaper. They run on all devices, don't have to be installed separately, and are not subject to the review of an external authority - Apple is particularly notorious for its strict rules. Changes and updates can be done immediately without further consultation. Their crucial disadvantage, however, is the lower flexibility in design and usability.

Solutions from the browser: Web- or hybrid apps

A hybrid app refers to an opportunity to take advantage of a combination of app and portal by displaying it in the "app-frame" content of the mobile portal. For the user this is hardly noticeable, but it offers the company a big advantage. Instead of programing all services anew for every app, existing mobile internet services can be used.

So-called Web apps go even one step further, where by means of Web and Java technologies optimized Web pages supersede apps. These Web apps combine the benefits of the internet in terms of range and support with the typical look and feel of apps. Data can be stored directly on the device so that the use of the Web app is possible even without a data connection.

Without a sound strategy, the question if an "app or portal" is better can't be answered seriously. To avoid the unnecessary wastage of resources from unsuccessful portable measures, an analysis, as thorough as possible, is crucial. The current hype around apps doesn't necessarily mean that they are providing the best solution. Actually, right now it seems that the mobile Web still has much more to offer with its omnipresent ease of access while mobile app strategies are still challenging to successfully realize. This is, not to mention, according to Pinch Media that around a quarter of all apps are never used again after the first day, and they have even noted that 95% of downloaded mobile apps are never used again after the first month. So, to no surprise, a widespread norm right now is the strategy of a mobile portal plus iPhone app.

Since your competition never sleeps, the spread of alternative technological platforms such as Android is growing by leaps and bounds. In the long term, solutions that achieve the best possible results with the minimum use of resources will be ahead of others, such as Web-based mobile apps that work the same way as a Website would - loading the content of a page when a user requests to view that page, using the browser cache to make things speedier for users with primed caches, but all graphics, images, scripts and data are loaded from your Web server as opposed to being on the client's device (in the case of most native apps).

So far, the mobile Web has more to offer. Still, a mobile Web app differs from a mobile version of a website due to it being tailor-made for the mobile platform, UI will generally be more customized and include more mobile-device-centric user interfaces. We will see what comes next!