According to Altimeter‘s 26-page report "Converged Media Imperative", advertising, or paid media has traditionally led marketing initiatives, both online and off, but advertising no longer works as effectively as it did unless bolstered by additional marketing channels - owned and earned media - which are vital to campaigns, and help to amplify and spread brand messages across a myriad of complex paths that consumers follow across devices, screens, and media.

Enjoy the summary, and make use of the great checklist below to give your marketing performance the boost.

Earned and owned media have become so essential that they are now co-mingling with paid media to create new media hybrids. Paid + Earned; 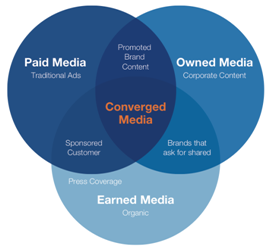 And although consumers make less distinction between channels, marketers remain specialized in one medium at the expense of the other. Marketers are now required to develop scale and expertise in owned and earned media to drive effectiveness, cultivate creative ideas, assess customer needs, cultivate influencers, develop reach, achieve authenticity, and cut through clutter.

All media are on the verge of converging

Gone are the days when marketers could spoon feed pre-fab sales pitches to apathetic consumers. Welcome to the empowered buyer: a savvy and dynamic customer, armed with information, multiple options, and devices, and backed up by an ever expanding network of peers and references.

Through the emergence of the digital web, social channels, cloud-based technologies, mobile platforms, and shifting notions of convenience, consumers are dancing a new dance in the way they make purchasing decisions. Marketers must keep in step. They’ve already shifted budgets in an effort to keep up with buyers. About half of marketers surveyed in 2012 are increasing their spend in digital channels, away from traditional ones. 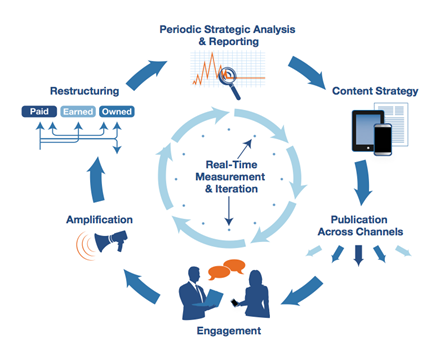 What resonates most with the audience is what maximizes the impact of the investment. With consumer attention fragmenting, digital channels proliferating, and the effectiveness and engagement with ad units plummeting, display advertising messages and campaigns are no longer a standalone marketing solution.

Marketers, meanwhile, are increasingly aware of the need to establish greater ubiquity across more channels throughout the social web. Supplementing this is the need to create content in owned channels and to encourage dialogues with, listen to, and amplify consumer conversations and gain traction.

Converged media utilizes two or more channels of paid, earned, and owned media. It is characterized by a consistent storyline, look, and feel.

All channels work in concert, enabling brands to reach customers exactly where, how, and when they want, regardless of channel, medium, or device, online or offline.

With the customer journey between devices, channels, and media becoming increasingly complex, and new forms of technology only making it more so, this strategy of paid/owned/earned confluence makes marketers impervious to the disruption caused by emerging technologies.

Altimeter has compiled this great checklist to help marketers to get with their own converged media strategy. The full report also offers detailed explanations, examples, and emerging practices for those working with the checklist.

The convergence of paid, earned, and owned media is a reality. This commingling of media channels is hardly limited to ad hoc occurrences on social networks. Rather, it has become a business model. From software vendors such as Bazaarvoice to social networks like Facebook, products and services are being built around models that combine paid, owned, and earned media to increase marketing performance and cut through clutter.

Companies that don’t prepare for this convergence now in digital channels will be at a marked disadvantage for two reasons: paid, owned, earned integration is already bleeding into more traditional forms of media, beginning with television. As traditional forms of media become more digital, POE convergence will be pervasive. And, as the Internet of things becomes a reality, in 10 years media will be embedded into and around common objects. Products, appliances, and tools will contain data. Initially, this information will be paid and owned, but very quickly earned components will develop and commingle with other information.

Preparing for POE integration is therefore not just a demand of present reality, but an inevitable necessity of the future of marketing, advertising, and communications. (Source: www.altimetergroup.com)